A Few of the Most Eminent of the Irish Saints 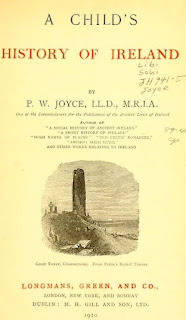 Books written for children are among my favourite sources for the lives of the saints. I was recently having a look at an early twentieth-century school textbook 'A Child's History of Ireland', and saw that the author, P.W. Joyce, included a list of what he termed 'a few of the most eminent of the Irish saints'. I am always interested when reading any source to note which saints are under discussion, since the cult of the saints is not a static thing and interest in individual saints tends to wax and wane over the centuries. In Joyce's list, which is a footnote to a longer entry for each of the three Irish patrons, he begins by numbering some of the great monastic founders, then moves on to a representative selection of Irish saints who flourished in Europe and finishes with the ninth-century scholar John Scotus Erigena. It is worth noting that in addition to Saint Brigid, he includes another two women in the list, Saints Ita and Dympna:

Besides Patrick, Brigit, and Columkille, the following are a few of the most eminent of the Irish saints:

St. Ailbe of Emly in Limerick, who was ordained bishop of Cashel by St. Patrick: he was ecclesiastical head of Munster.

St. Enna or Endeus of Aran in Galway Bay; died about 542. This island was afterwards called Ara-na-Naemh [naive], Aran of the saints, from the number of holy men who lived in it.

St. Finnen of Clonard, the founder of the great school there: called "The Tutor of the Saints of Ireland": died 549.

St. Ciaran [Kieran] of Clonmacnoise, which became one of the greatest of all the Irish monasteries: died 549.

St. Ciaran or Kieran, the patron of Ossory: born in the island of Cape Clear; but his father belonged to Ossory: died about 550.

St. Brendan of Clonfert in Galway, or "Brendan the Navigator": born in Kerry: died 577.

St. Senan of Scattery Island in the Shannon: died about 560.

St. Comgall, the founder of the celebrated scbool of Bangor in Down, which rivalled Clonard: died 602.

St. Kevin, the founder of Glendalough in Wicklow: died 618.

St. Carrthach or Mochuda of Lisrnore, where he founded one of Ireland's greatest schools: died 637.

Among the vast number of Irish men and women who became illustrious on the Continent, the following may be named : —

St. Fursa of Peronne and his brothers Foillan and Ultan; Fursa died about 650 (see page 17).

St. Dympna or Domnat of Gheel, virgin martyr, to whom the great sanatorium for lunatics at Gheel in Belgium is dedicated: daughter of an Irish pagan king: martyred, seventh century.

St. Columbanus of Bobbio in Italy, a pupil of Bangor, founded the two monasteries of Luxeuil and Fontaines: expelled from Burgundy for denouncing the vices of king Theodoric; preached successfully to the Gauls; wrote learned letters: finally settled at Bobbio, where he died, 615.

St. Gall, a disciple of Columbanus, patron of St. Gall (in Switzerland) which was named from him.

St. Fridolin the Traveller of Seckingen on the Rhine: died in the beginning of the sixth century.

St. Cataldus bishop of Tarentum, from the school of Lismore, where he was a professor: seventh century.

Virgil or Virgilius bishop of Salzburg, called Virgil the Geometer, from his eminence in science: taught, probably for the first time, the rotundity of the earth: died 785.

Clement and Albinus, placed by Charlemagne at the head of two great seminaries.

John Scotus Erigena, celebrated for his knowledge of Greek: the most distinguished scholar of his time in Europe: taught philosophy with great distinction in Paris: died about 870.