The Irish Tradition of the Antichrist 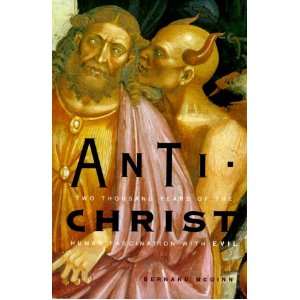 I have been reading a most interesting paper by the Irish Bibilical scholar, Fr Martin McNamara, on the Irish Legend of Antichrist, a tradition which can be traced back over a millennium. In his paper the author examines an earlier work by another Irish scholar, Brian Ó Cuív, who published an edition of a Middle-Irish work called 'The Conception and Characteristics of Antichrist' in 1973 (Two Items from Apocryphal Tradition', Celtica 10, 87-113). Ó Cuív felt this work dated to ca. 1200 and as a background to it, listed practically all the vernacular Irish texts with descriptions of, or reference to, Antichrist. There are six verse compositions and seven prose, and Ó Cuív noted that there was a certain unity of presentation in these texts. In the text which he edited, the Antichrist story contained the following elements:

(1) Antichrist is the son of his own sister who conceives him when his father, a bishop in Jerusalem, lies with her on the Friday before Easter at the instigation of the devil.

(2) in appearance Antichrist has a face with one eye

(3) he has miraculous powers: he can make gold out of grass and anise (?) and wine out of water, he can cause disease and cure the sick, he can create a moon, sun and elements (?), he can do anything that Christ did on earth except restore people to life; he has a thousand fair women in his company.

Fr McNamara then goes on to examine the verse and prose texts from Ó Cuív's list. The earliest reference is in The Poems of Blathmac (A.D. 750), who ends his two poems in honour of the Virgin Mary with a mention of the slaying of the Antichrist by the Archangel Michael:

'It is Michael, your son's warrior, who will take a saintly sword to the body of impious Antichrist who shall be born of a great sin' (quatrain 259).

Fr McNamara comments: 'Even from this brief poetic text we can gather that Blathmac knew of a developed Antichrist legend, a legend that he draws on, rather than give in any detail. Very significantly, Blathmac's Antichrist tradition also contained the element of his birth 'of a great sin'. This seems proper to the Irish form of the legend as we shall see in consideration of the next item and in some following'.

The next item is the Hiberno-Latin Liber de Numeris (ca. A.D. 750) which is extant in a number of manuscripts and believed by scholar Robert McNally to originate from the Hiberno-Latin circles of Bishop Vergilius of Salzburg. The author arranges his subject according to numbers. The number four has him consider the four beasts of the Book of Daniel, in the examination of which he inserts the section on Antichrist. The belief that Antichrist is to come on earth as a mortal and from the tribe of Dan was widespread. The belief that his birth would be the result of an unnatural union was also known. The Liber de Numeris text, however, presents the union as incest:

'Before the judgement he (i.e. Antichrist) will be set loose for a short while so that he may come and dishonestly and illicitly assume flesh to test the saints and deceive his own, and so that with his own and the impious he may perish all the worse later. From the tribe of Dan he, cruel flesh, takes flesh, and a father sinning in his own daughter makes a cursed child... so that his (i.e. Antichrist's) father appears as his own grandfather and his mother as his sister'.

Such a presentation of the birth of Antichrist, McNally noted, occurs nowhere else. We now know that it is a specific feature of the Irish Antichrist tradition, which was, it would seem, already known by Blathmac.

The author then goes on to examine a number of other texts, most of which mention the Antichrist in passing, among them the Martyrology of Oengus which mentions the slaying of Antichrist in the entry for the Feast of St Michael (September 29) and the poems of Máel Ísu Ua Brolcháin and Bécán Bec mac Dé. There is a more substantial reference in a Poem on the End of the World, ascribed to St Colum Cille. It is found in a 16th-century manuscript amongst a collection of poems attributed to the saint. The poem on the end of the world deals with the Antichrist at its conclusion, even though he is not actually named. The text is incomplete and difficult to translate, but Fr McNamara reproduces Ó Cuív's efforts:

'A macu will come to the world with great strength, a powerful cunning man, a sister of his own will be his mother.
A daughter will conceive him by her own father like a serpent; very beastlike (?) will be the son who will be born in the city.
His teeth will form one surface – certain according to my tidings – a host behind ramparts (?); his slender feet will have six toes according to the mysteries.
A sour resolute man, a scourge from hell, what I say is true, a black hard deceiver with a grey blush protruding from his brow.
He makes (recte will make) gold from biestings of the plain what is more gloomy?'

Fr McNamara now goes on to examine another strand of the Antichrist tradition represented in the Irish sources – its connection to apocryphal works attributed to St John, the Beloved Disciple. I was surprised to learn that texts bearing on the Antichrist and with the Antichrist legend were still being copied in Irish manuscripts as late as the 19th century. One of these is preserved in the collection of the Royal Irish Academy and was the work of a father and son team. The father, Micheál Mac Peadair Uí Longáin, began compiling his manuscript in the 18th century. It includes an item on the coming of the Last Judgement given as a response to a query of St John the Evangelist concerning the end of the world. This appears to end incomplete with the phrase '... at that time Enoch the son of Methusalem will go forth in his human body from the places of the great light of Paradise to encounter the Antichrist”. After this sentence Micheál Óg Ó Longáin, the scribe's son, has appended a text on Antichrist, under the heading Sgel Ainntechrisd, “The Story of Antichrist”. This is followed by the colophon:

'It is now 50 years since my father wrote the beginning of this story of Antichrist, and it is now in the year 1816 that I myself have finished it in Cork, having drawn it from an old vellum book that was written 900 years ago”.

Professor Gerard Murphy was of the opinion that the “ancient vellum book” from which Micheál Óg copied was the Book of Lismore, even though his father's text of the Last Judgement is very different to that found in the Book of Lismore.

Sources and Development of the Irish Legend

Having looked at the Irish texts originally identified by Ó Cuív, Fr McNamara attempts to examine whether they can be related to other known apocalyptic texts in order to identify possible origins. The Irish versions of the Legend which are based around texts relating to St John may originate in the apocryphal Apocalypse of John, although more research is needed to establish the relationships between Irish and eastern material.

Apart from the notion that Antichrist is the result of incest, another feature of Irish texts is the treatment of the physical features of Antichrist, or the Antichrist physiognomy. Bernard McGinn, who published a study in 2000 called 'Antichrist – Two Thousand Years of the Human Fascination with Evil', has traced the development of the tradition from the beginning. He sees the Antichrist physiognomy as the second most important theme of the period of development (AD 100-500), but notes that it is very much an eastern tradition, indeed it is curious that the Antichrist physiognomies had so little effect on Latin Antichrist beliefs. Almost every important apocalyptic revealer was eventually credited with providing a physical description of Antichrist. McGinn gives a chart detailing 14 examples and of these most are eastern with 2 Latin and 2 Irish (Leabhar Breac and Book of Lismore).

The classic western text on Antichrist comes from around AD 950 in De ortu et tempore Antichristi of Adso, later abbot of Montier-en-Den. The Irish tradition does not belong to this. It is independent of it. As McGinn writes (97-8)

'Antichrist physiognomies accompanied by unusual legendary accretions belonged to the Eastern imagination at this time (950-1000). Yet they became prevalent in one place in western Europe – Ireland, at least from the tenth century on. The native imagination, coupled with the Irish preceliction for apocalyptic literature suspect in other parts of Latin Christendom, seems to have much to do with this unexpected turn of events'.

In this essay I have given the relevant texts and outlined the state of research on the Irish Antichrist Legend as best I can. The time now seems ripe for a thorough examination of this material, through critical editions of all the Irish texts, accompanied with an attempt to situate these in the general history of the Antichrist Legend, at the same time tracing development within the Irish tradition itself over the eleven hundred years between the earliest (ca. AD 750) and latest texts.