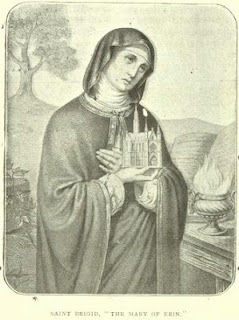 Another interesting compendium of Irish saints is a list which compares our native saints with those of the universal Church. J. F. Kenney, in his classic study of the sources for the early history of the Irish Church, remarks:

One of the conceits of Irish hagiographers was the equation, because of some real or fancied resemblance, of the heroes of their own native sanctilogium with the famous personalities of world Christianity. Some of these comparisons are here gathered into a list.

The Sources for the Early History of Ireland: Ecclesiastical - An Introduction and Guide (reprinted edition, Dublin, 1979), 484.

There are two separate versions of this list of parallel saints, one from the 12th-century Book of Leinster and another from a manuscript in the Royal Library of Brussels appended to the Martyrology of Tallaght. In both, Irish saints are likened to saints of the Old and New Testaments and to important saints of the universal church. There is only one female saint on the list, Saint Brigid, and her parallel with the Mother of God is something with which Irish people are very well-acquainted since it is reflected in the popular title of Muire na nGael, the 'Mary of the Gael' by which our patroness is known. I doubt that any of the other equations would be quite so familiar to people today.

I have taken the texts of the lists below from the work of two nineteenth-century Irish Anglican writers. The Brussels Manuscript list is given in Latin, but it is quite straightforward to work out, especially as both versions are so similar. We can start with The Book of Leinster list which has 33 names:

The following enumeration of native and foreign saints is taken from the Book of Leinster (facsimile), p. 370 c, d. The heading is, "Hic incipiunt sancti qui erant bini unius moris"—" Here begin the pairs of saints who were of one manner of life."

There is a similar list prefixed to the Martyrology of Tamlaght, in the Royal Library of Brussels, which gives thirteen apostles—Paul and Matthias being included. The present list has only twelve—one, James, being omitted. In the Brussels manuscript he appears as James, Apostle = Finnian of Moville.

The Brussels MS list of 32 names reads as follows:

Todd also adds in a footnote that Saint Patrick is compared to St. Peter in the Hymn of St. Sechnall, line 10, but elsewhere to Moses; see Vit. Trip. lib. i. c. 37. He also explains the reference in both lists to 'Gregory of the Morals' as Pope Gregory the Great, author of the Libri Moralium, or Exposition of the Book of Job.

There seem to be a few differences between the two lists, for example, Saint Kevin of Glendalough is likened to Paul the Hermit in the first list, but to Saint Martin of Tours in the second. The great eastern founder of monasticism, Saint Anthony is also parallelled by two different saints, Lonngarad in the first and Feichin of Fore in the second. But there is a high degree of correlation between the two lists and it is interesting to see how these Irish saints, some of whose names would not be well-known today in their own country, were viewed as 'types' of other famous saints of the universal Church.