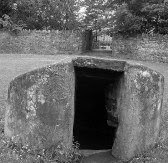 Today the Irish calendars commemorate a spiritual son of the great Saint Carthage of Lismore, Cronan or Mochua of Clashmore, County Waterford. Mochua is a diminutive form of the name Cronan. As Canon O'Hanlon records in one of his footnotes to the entry for today's saint, it is not an uncommon name:

Colgan says, that in our Menologies there are eight Cronans, and eighteen Mochuas, whose feasts are distinct; and, in almost all instances, the same saint is at one time named Cronan, and at another place, Mochua. Thus, in the Martyrologies of Tallagh, Marianus Gorman and Donegal, at the 28th of April, St. Cronan of Roscrea is called Mochua. In like manner, at the 22nd of June, St. Cronan, Abbot of Ferns, is called Mochua. Likewise, at the 30th of March, Mochua, Abbot of Balla, and at the 6th of August, St. Mochua of Clondalkin, are called by the name of Cronan. St. Oengus the Culdee, in his Homynomous Saints, book i., chapter xix., numbers more than fifty saints, bearing the designation Mochua, many of whom are called by the name of Cronan, in the aforesaid martyrologies. See Colgan's "Acta Sanctorum Hiberniae," X. Februarii, n. 2, p. 304.

Colgan also appears to have believed that Saint Cronan/Mochua of Clashmore may have been martyred by the Danes, at Swords, County Dublin. He is not alone in this, as the calendar of Cathal Maguire records for February 10th:

Cronanus, vel est Mochua de Miliuc, id est, Cronanus filius Mellani de Glaismor in Desiis Momoniee, & Lismorioe colitur : vel Glaismor est Ecclesia juxta Surdum ad austrum." A comment is added, that Glasmor was a church, near Swords, to the south, and that the Northmen came from Inbhear Domnann one night, and slaughtered St. Cronan with all his cenobites, so that not one of his family escaped.

However, O'Hanlon believes this martyred Cronan to be another saint, distinct from Cronan/Mochua of Clashmore. Confusion arose due to the confounding of Clashmore in County Waterford with Glassmore near Swords, County Dublin on some of the later calendars. O'Hanlon believes that our Saint Cronan/Mochua flourished within the County Waterford area, where he first embraced the monastic life under Saint Carthage:

The Life of St. Carthage states, that our present St. Cronan or Mochua had been, from his youth, a monk at Rathan. Our saint is said to have been the first, who made his religious profession, under St. Carthage, in the famous monastic establishment of Rathen ; and, it is on record, that eight hundred and seventy-seven monks were at one time subject to this very distinguished abbot's spiritual supervision. Here, deriving every advantage from the training of this great saint, Cronan made considerable progress in virtue. At length, he was placed by St. Carthage, over an establishment, near Rathen. This place is called Cluain Dachran. We are told, this locality is identical with Clonrane, in Westmeath county. When Cronan was there appointed, he had been informed, that Cluain Dachran would neither be the place of his death, nor of his resurrection.

At the same time, or subsequently, he was placed in charge of Glassmore church, about four miles north of Youghal, in the barony of Decies within Drum, and in the present county of Waterford. It was situated, not far from the noble Blackwater River.

The saint's feast on the 10th February is well attested in the Irish calendars. The Martyrology of Oengus records:

"Bright star, victorious offspring,
A glowing mass of gold, a radiant guest,
Is Cronan the chaste without reproach,
The white sun of Glass Mor.”

The later Martyrology of Donegal, however, while associating Saint Cronan with the Waterford area and Lismore, also mentions Glassmore, near Swords, and the massacre by the Vikings:

CRONAN, of Glais-mor in Deisi-Mumhan, and of Lis-mor. Or Glais-mor, a church that was by the side of Sord to the south, until the foreigners of Inbher Domhnann came to him and killed him and all his people in one night, so that not one of them escaped without being destroyed; and thus were they martyred.

The Calendar of Cashel also connects him both with Lismore and Swords, whereas the earlier Martyrology of Tallagh notes on this day Cronan, son of Mellain, of the Decies, and in Lismor.

Finally, Canon O'Hanlon notes the presence of the feast of Saint Cronan on the Scottish calendars:

This saint was venerated, likewise, and on the same day, in Scotland. There, however, he is not classed with the martyrs. The holy confessor, Cronan, in Ireland, is set down at the 10th of February in the Kalendar of Drummond, as having departed to Christ.

The memory of Saint Mochua is still commemorated in Clashmore today, and popular devotion centres around the holy well dedicated to the saint, as shown in the photograph above.