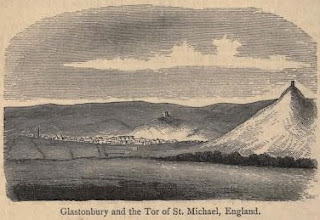 February 5 is the feastday of an Irish saint said to be linked to the English monastery of Glastonbury. This foundation laid claim to a number of Irish saints including all three of our national patrons, but today we commemorate Saint Indract who was said to have been martyred, along with a number of companions, while travelling among the Saxons. He appears to have been the source of a cult which extends beyond Glastonbury, and while the kernel of his story remains the same in the various sources, the dates and the details can vary. Let's see if we can piece together the various parts of the puzzle of Saint Indract beginning with the traditional view of the saint as a fifth-century martyred pilgrim:

Saint Indract was another fifth-century Irish saint whom William of Malmesbury commemorates at Glastonbury. He tells us that the tradition of his coming was a great favourite. He refers to having written about him elsewhere. He has done so in the Acts of the King of England. The story is that Saint Indract, with seven companions was on his way back from a pilgrimage to Rome, and turned aside to visit Saint Patrick’s tomb at the ‘Second Rome’, as Glastonbury was called because of the number of saints buried there. They had filled their scrips with parsley – a most intimate touch – and other seeds for Ireland. Their staves were tipped with brass. Unfortunately, the natives mistook this for gold. They were all murdered in the neighbourhood of Shapwick, near Glastonbury. Some three centuries later in the time of King Ina of the West Saxons, all their bodies were translated to Glastonbury and buried in the Abbey Church, the saint under a pyramidal stone on the left of the altar, the others at various spots under the pavement in the Church.

In an entry for a Cornish Saint Ildreith, modern scholar Nicholas Orme examines the possibility that this Cornish holy man may be the same as the Irish pilgrim, whose martyrdom he places in the early eighth century. He also presents a most useful summary of the various literary sources for the life of the saint:

His life was written in Old English, probably at Glastonbury, by c.1100. This Life has been lost but was translated into Latin in the early 12th century, probably with additions as the so-called D or Digby Life. Another Life was written by William of Malmesbury, but it too has disappeared.

The Digby Life states that Indract was the son of an Irish king who visited Glastonbury in the early 8th century with nine companions, while journeying home from a pilgrimage to Rome. On leaving the abbey, they were murdered at a place called Hywise (probably Huish Episcopi, Somerset) by one of the nobles of King Ine of Wessex named Huna and his men, out of greed for the wealth they were thought to be carrying. The bodies were buried in a cave, but a persistent light shone over their grave which caused the king who was staying nearby to discover the murder and order their re-burial at the abbey: Indract by the altar, the others under the floor. Miracles subsequently took place.

The name Indract is indeed Irish (Indrechtach), but there is no certainty about when the saint lived and his association with Ine may be a conjecture of the 11th century. Even at Glastonbury traditions varied about him. In the 14th century he was said to have been martyred with seven fellow sufferers at Shapwick (Somerset), while William Worcester recorded in 1478 that he was buried at Shepton (a possible mistake for Shapwick) with a hundred companions. The cult was chiefly a Glastonbury one but the saint was commemorated at other places by the 11th century, probably including Shaftesbury and Winchester, and a bone of St Hyldracus the martyr reached Waltham Abbey (Essex) before 1177. Indract’s day was kept on 8 May from the 12th century until the end of the middle ages; the mid-17th- century Catholic writer John Wilson, however, assigns it to 5 February.

None of the early material links Indract with Devon or Cornwall, and it is not until John of Tynemouth’s account of the saint in his 14th-century Nova Legenda Anglie that such a connection is made. John based his account on the Digby Life but added the information that Indract was accompanied on his travels by his sister Dominic and that their company, after leaving Ireland, made their first landfall at Tamerunta in Britain, where they lived for a time as a monastic community before going to Rome and Glastonbury. John, or a Glastonbury source that he used, evidently conceived this story from the place-names of the Tamar valley, Tamerunta being probably a scribal error for Tamerton (perhaps Tamerton Foliot), Dominic being inspired by the church of St Dominick, and Indract by the chapel of Ildreith or Ildract in the parish.

Dr Padel has argued on linguistic grounds that Ildreith is compatible with Indract and that the name (and therefore the chapel) may probably be backdated to at least 1100, when Cornish was last spoken in the neighbourhood. If the saints are indeed the same, the chapel is the only dedication to Indract outside Glastonbury, but the abbey is not known to have held land in the vicinity and no explanation of such a dedication is forthcoming. The evidence is too late and fanciful to support a connection of the historical Indract with Cornwall, since the earliest sources link him only with Somerset. A modern chapel of St Indract has been built at Halton Quay near St Dominick.

However, Michael Lapidge has suggested yet another possibility, that our saint was a ninth-century abbot of Iona:

Saint Indract, an Irish pilgrim who was murdered in the vicinity of Glastonbury (probably at some point in the ninth century) and was subsequently venerated there was a martyr. The name ‘Indract’ represents the Irish form Indrectach, and the saint is probably identical with an abbot of Iona bearing that name who is recorded in the Annals of Ulster s.a. 848 [849] as having transported the relics of Saint Columba to Ireland (from Iona presumably), the same abbot is said s.a. 853 [854] to have been martyred ‘among the Saxons’ apparently while on a pilgrimage to Rome. The account of his martyrdom is recorded in an eleventh-century Anglo-Latin passio composed at Glastonbury, William of Malmesbury also composed a Life of Indract, but this has been lost.

As Orme's account above noted, there is also some confusion around the feastday of Saint Indract. Canon O'Hanlon noted this too:

Thus whilst confusion remains about the exact details, dating and feastday of this saint, it does seem that the tradition of Indract as an Irish pilgrim martyred among the Saxons is shared by all of the various sources. I am interested to see how Irish saints were prized by English monasteries in the middle ages and Glastonbury's attempts to claim everyone from Joseph of Arimathea to Saint Patrick through to King Arthur are particularly enjoyable to research. Sorting out fact from fiction in a site so heavily overlaid with romantic legend though is rather more of a challenge.

Email ThisBlogThis!Share to TwitterShare to FacebookShare to Pinterest
Labels: Irish saints in Britain

Quite a story. Many thanks!