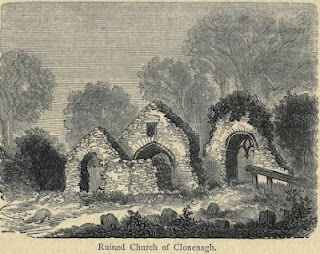 We commemorate one of the great Irish masters of the ascetic life, Saint Fintan of Clonenagh on the 17th of February.  The sources for his life and feast have been summarized by diocesan historian, Father Michael Comerford:

On the 17th of February the Feilire of Aengus records, "The Feast of Finntan, the prayerful, of vast Cluain-Ednich;" and the Gloss in the Leabhar Breac, and the Martyrology of Donegal, on the same day, add:- Fiontain, son of Gaibhreine, son of Corcran, son of Eochaidh, son of Bresal, son of Den.- Here he and (St.) Brigid meet (in their pedigrees), Abbot of Cluain-eidhniach in Laoighis (Leix). Great was the abstinence of this holy Fiontain, as is evidenced from this verse (of Aengus)-

Fiontain the generous
Never ate during his time
But bread of barley corn
And water of earthy clay.

Colgan styles him "Fintanus Stationarius de magno Cluaineadnach;" the epithet of stationarius being applied to him from his praying, like many others of our early saints, with his arms extended in the form of a cross.

St. Fintan received his early education from a holy priest by whom he was baptized. Whilst yet a boy, he was visited by St. Columbkille, who, on that occasion, foretold St. Fintan's future distinguished career. When he arrived at man's estate, he entered the Monastery of Tir-da-glass (now Terryglass, Co. Tipperary), where St. Columba, son of Crimthain then presided over a famous school. Having passed a novitiate here, he and two, some say three, companions, being anxious to find a retired place where they might devote themselves to the service of God, consulted St. Columba, and, accompanied by him, they came to Clonenagh. Here, it is said, St. Fintan and his companions passed a year, but, finding their solitude greatly broken in upon, they determined to abandon the place, and directed their course to the Slieve Bloom mountains, again accompanied by St. Columba; this saint, looking back upon Clonenagh, saw a multitude of angels hovering over it. His disciples seeing him sorrowful, asked the cause; the saint replied: "Because I see the place we have left filled with the angels of God, and these angels unceasingly minister between it and heaven". "One of us", he added, "should return and abide there for the future". Whereupon Fintan said: "Whomsoever, O Father, you direct to return, he will instantly obey". Columba replied: "Go you in peace to that spot, O holy youth, and the Lord be with you. It has been divinely revealed that for you it shall be the place of your resurrection." St. Fintan accordingly retraced his steps to Clonenagh and established himself there; this was about the year 548. Great numbers flocked to this place to serve God under the guidance of our saint, amongst whom was St. Comgall, afterwards the founder of the famous Monastery of Bangor, who passed some years under his direction. The discipline observed at Clonenagh was very rigorous; the fasting and abstinence were so severe that St. Canice of Aghaboe and other holy men remonstrated with St. Fintan on the subject. Yielding to their representations, he relaxed the rigour of his rule in favour of his community, but, himself, adhered to his former mode of life. Finding his end approaching, St. Fintan assembled his monks and named Fintan Maeldubh as his successor.

Rev M Comerford" Collections relating to the Dioceses of Kildare and Leighlin" Vol.3, (1886).