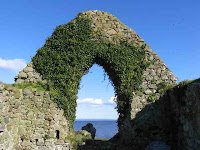 Today some Irish calendars may commemorate a monastic founder in the north of Ireland, Saint Colman of Ardboe, County Tyrone. The picture shows the ruins of the monastery of Ardboe as they appear today. As we will see, however, there is uncertainty surrounding the precise identity of the saint Colman whose feast is commemorated on this date. Other calendars assign February 18 to the more famous Saint Colman of Lindisfarne and Inis Bofin, although he has another feastday in August. Canon O'Hanlon explains some of the difficulties involved in trying to disentangle the many Irish saints who bear the name of Colman :

THERE are no less than one hundred and thirty saints, named Colman, enumerated in our Irish Martyrologies and Histories. It is not wonderful, therefore, that much confusion must exist, in distinguishing their festivals and natal days. The task of individual identification must be difficult, especially as only the simple name occurs, in many instances. At the 18th of February, Colgan notices a Bishop Colman. This saint is venerated at Ard-bo near Lough nEathach, in the county of Tyrone. Little, however, is known with certainty regarding his parentage, birth-place, the age in which he flourished, or even his Acts. It seems probable, that this is the St. Colman, surnamed Mucaidhe of Ard-bo, or Arboe, the son of Aid, son to Amalgad, son of Muredach, son to Carthenn, son of Erc, son to Ethac or Eochod, son of Colla Huasius, King of Ireland. This genealogy—if relied on—should place his period in the sixth century. His memory is barely recorded in our Martyrologies, most of which assign his festival to this day ; whilst the Martyrologies of Tallagh and Maguire commemorate him, on the 21st of February. The very great number of saints, bearing this name and to be found in Irish Calenders, often leaves us in doubt regarding the particular St. Colman, who might be mentioned, in various lives of Irish Saints. At Ard-bo or Harbonensis—as the place is sometimes found Latinized—there was formerly a splendid monastery. There, too, were the relics of St. Colman preserved. In the year 1166, however, a fire broke out, and ruined the place. In the seventeenth century, only a few vestiges of its former celebrity remained. These were the remains of the old church walls, with a cross in good preservation, about fifteen feet in height. On it were several inscriptions.

The festival of St. Colman is recorded at the 18th of February, in the "Feilire" of St. Oengus. We find entered, in the Martyrology of Tallagh, at the 18th of February, a festival in honour of Colman. This Calendar appends the following words to the notice : " About Meuriab near Mona (bog) to the north there lies Colman." This, however, hardly helps us to the exact identification of his place. Colman is venerated on this day, as we read in the Martyrology of Donegal. The Scottish writers, and some foreigners misled by them, have, however, confounded this saint and his festival, with the cultus of another St. Colman. He too was an Irishman, and much more celebrated than the present holy man. Thus, the Bollandists have, at this date, several dissertations, and an epitomized Life of St. Colman, Bishop of Lindisfarne, taken from the Aberdeen Breviary. It is contained in the Pars Hyemalis. In like manner, Bishop Forbes has entered some notices of St. Colman, who is so much celebrated, in connexion with Scotland. Thus, too, St. Colman, that Bishop and Confessor, who so tenaciously clung to the Scottish traditions, in reference to the celebration of Easter, has a festival assigned to him, at this date, by Camerarius... Again, it is said, that at the xii. of the March Kalends, which accords with the 18th of February, St. Colman, Bishop and Confessor, had been venerated in Scotia. The sanctity of his life, the uprightness of his moral character, and the merits of his virtues, afforded example for the imitation of his actions by a faithful flock. He was buried, we are told, at Terbert, in the diocese of Ross. The Kalendar of Drummond and of the Aberdeen Breviary has a feast for Colman, Bishop and Confessor, at xii. of the March Kalends. He had an office of nine lessons. A Scottish Kalendar, likewise, notes him.

But, the leading facts of his life are, that St. Colman left Northumberland, A.D. 664, then he went to Ireland, in 667 and he died, on the 8th of August, A.D. 674, according to the Irish Annals. Camerarius, once more, places his day at March the 7th. Again, the Kalendar of Arbuthnott enters the festival of St. Colman, Bishop and Confessor, at the xii. Kalends of March. He had an office of nine lessons, as we are informed. This has been reproduced in the pages of the Bollandists. In Adam King's Kalendar, at the 18th of February, we find entered a feast to St. Colman, successor to St. Finnane, and Confessor in Scotland. Dempster notes St. Colman, Confessor, in Scotia, at this date. At the 8th of August, we shall treat about the particulars of his history.