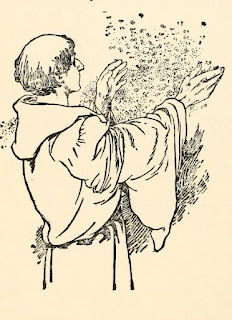 Saint Modomnoc (Domnoc, Dominic,) commemorated on February 13, was a student of the monastic life under the patron of Wales, Saint David of Menevia. Most of the information recorded about Saint Modomnoc comes from the Life of Saint David. He does, however, also appear on the Irish calendars. The Martyrology of Oengus records:

13. In a little boat, from the east, over the pure-coloured sea, my Domnoc brought vigorous cry! the gifted race of Ireland's bees.

and the Martyrology of Donegal:

MODHOMHNOG, of Tioprat Fachtna, in the [south] west of Osraighe. He was of the race of Eoghan, son of Niall.

The curious reference in the Martyrology of Oengus to the 'race of bees' is explained by a story in the Life of Saint David:

43. After that the aforesaid Modomnoc had devoted himself for a long lapse of years to the humility of obedience, his virtuous merits increasing, he sought the island of Ireland. The whole multitude of bees followed the ship which he had entered and settled with him in the ship, where he had sat down, on the ship's prow. For as he attended on the bees' quarters, he paid heed with the rest of the work of the brotherhood to the hives in rearing the young of the swarms, whereby he might procure some luxuries of sweeter food for those in need. He, loath to defraud the fraternal community, returned, re-appearing in the presence of the holy father, and attended by the swarm of bees, which flew to their own quarters. David blessed him for his humility. Then bidding farewell to the father and brethren, and being saluted, he went away, but again the bees follow him. And it so happened that, whenever he started forth, they also followed. Again, a third time, he sailed for a while, and it happened as before. The swarms followed him, and he returned to David thrice. On the third occasion holy David dismissed Modomnoc to sail with the bees, and he blessed them, saying, " May the land to which ye hasten abound with your offspring. Never may your progeny be wanting in it. Our monastery will be deserted for ever by you. Never shall your offspring grow up in it." That this has continued till now we have learnt by experience, for we find swarms imported into the monastery of this father, but they, remaining there a little while, gradually cease. Ireland, however, wherein never could bees exist till that time, is enriched with abundance of honey. And so by the blessing of the holy father they have multiplied in the island of Ireland, since it is agreed that they could by no means exist there at first, for if you should cast Irish earth or stone in the midst of bees, they would shun it greatly, being scattered and flying away.

This story of Saint Modomnoc being responsible for the introduction of bees to Ireland is one which seems to have captured the imagination of various writers at different times. The 3rd-century author, Gaius Julius Solinus, appears to be the source of the idea that Ireland and its very earth were inimical to bees:

'There is no snake there; few birds; no bee; so that if any one should scatter dust or pebbles brought from thence among the hives [in other countries] the bees would desert their combs'.

This tale was still being told at the time of the 17th-century hagiologist Father John Colgan, who would have none of it. For him the story that Ireland had no bees before Saint Modomnoc introduced them was easily refuted:

'for Bede states, in his Ecclesiastical History, lib.1, c.i, that 'the island was rich in milk and honey..' ... But that bees and honey had existed in Ireland before this Dominic was born, is evident from the irrefragable testimony of the rule of St Albeus [Ailbe] in which (No. 37) we read:- 'When they [the monks] sit down at table, let their be brought herbs or roots washed with water, in clean baskets, also apples, beer and honey from the hive, the breadth of an inch, i.e. so much of honey-combs'.

'Therefore, against the authority of St. Aengus and others who assert positively that St. Dominicus [Modomnoc] was the first who brought bees into Ireland, it is to be remarked that this should be understood only of a certain species of bees; for there are in Ireland domestic or hive bees, and wild bees, and bees of different kinds and colours. St Dominic appears to have introduced the first hive bees into Ireland, from whose seed the domestic bees have been disseminated in that country.'

Wade-Evans, the translator of the Life of Saint David, speculates that the Welsh saint's dismissal of the bees may be explained by his opposition to the brewing of mead for monastic consumption.

Whatever the truth, Saint Modomnoc after his return to Ireland settled at Tiprad-Fachtna in County Kilkenney. He is also associated with a church called Lan Beachaire, 'the Church of the Bee-Keeper,' now Bremore, near Dublin. Canon O'Hanlon summarizes the evidence for his festival:

'At Tibberaghny, his feast was chiefly celebrated, and of that place, he appears to have been the chief patron. His natalis, or departure from this life, is celebrated on the 13th day of February, according to Maguire and other writers. Another festival is kept in his honour, however, on the 18th day of May, according to the same authorities. The year of his death is not known ; but, he flourished, about the middle of the sixth century.

At the 13th of February, St. Oengus, in his Feilire, commemorates not only St. Modomnoc, but also the account of his having introduced bees into Ireland. The Calendar of Cashel, the Martyrology of Tallaght, Marianus O'Gorman, Cathal Maguire, and the Martyrology of Donegal, agree. In the Circle of the Seasons, he is commemorated, as a bishop and confessor. In Scotland, his memorial was kept. At the Ides, or 13th of February, the festival of St. Modomnoc, confessor in Hibernia, is set down in the Kalendar of Drummond. This is also stated to be the date for his departure to Christ.'

The Life of Saint David also records that thanks to a miracle of the Welsh master, his pupil Modomnoc was saved from a premature departure to Christ:

41.Modomnoc by name, was excavating a road with the brethren on the steep near the confines of the monastery, whereby an easier access might be made for wayfarers to convey their burdens of necessities. He said to one of those who were working, "Why dost thou work so lazily and so slowly?" The man, stirred by the spirit of anger against him who said the words, lifted up the iron which he held in his hand, to wit, a two-edged axe, and attempted to strike him on the head. The holy father, David, saw this from a distance, and raised his hand towards them, making the sign of the cross; and so the hand of him striking was withered.

A most interesting article, seeing that Tobair Fhachtna, aka Tybroughney, is just a short few miles from me, close to the river Suir and Tybroughney castle. In the ancient cemetery there, I photographed the shaft of a High Cross many years ago. It's mentioned in the late Helen Roe's "High Crosses of Western Ossory". When I tried to find the place last year, the access point, etc., seemed to have changed and I gave up. Now that my interest has been re-ignited, I will seek it out again soon.

Good luck at finding the site again, let us know how you get on. Saint Modomnoc and the bees is an interesting story, glad you enjoyed it. Thanks for your support.