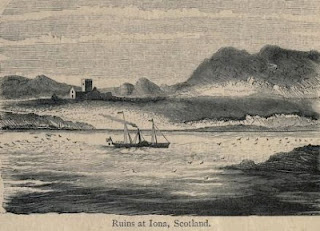 On February 24 the Irish calendars commemorate a saintly biographer of Saint Colum Cille of Iona, Saint Cuimine the Fair. His entry in the Martyrology of Donegal reads:

CUIMMEIN FlONN, son of Ernan, son of Fiachna, abbot of Ia-Choluim Chille. He was of the race of Conall Gulban, son of Niall, AD. 668. [He wrote the Life of Colum Cille in 134 chapters, which begins, 'Vens abbas et plurimorum pater caenobiorum.']

On the death of the Abbot, St. Suibhne, A.D. 657, St. Cuimine Ailbhe immediately succeeded him. The present saint visited Ireland, in the year 661, according to the Annalist Tighernach. The holy subject of this memoir was a man of great erudition, it is observed, and he adorned either Scotia with his gifts.

St. Cumine Ailbe departed this life, as is generally thought, on the 24th of February. The Annals of Clonmacnoise, it has been stated, place his death at the year 605, but 665 must have been intended, as the true entry. The Ulster Annals and those of the Four Masters, assign it to A.D. 668. According to the Annals of Tighernach, it happened A.D. 669. All the Irish Calendars, quoted by Colgan, agree in marking the 24th of February as the day of his death. The entry, 'Cuimin find mac Fiachna mic Feradaigh, Abb. Iae', is found in the Martyrology of Tallagh, at the same date. In the Martyrologies of St. Oengus, of Marianus O'Gorman, of Charles Maguire, and of Donegal, is recorded, on this day, the festival of Cuimmein Fionn, son of Ernan, son to Fiachna, Abbot of Ia Choluim Chille. Besides these notices, at the vii. of the March Kalends, which is the 24th of February, the Kalendar of Drummond states, that the Abbot Cummain, in Ireland, went to Christ. In Scotland this holy abbot was highly venerated. Thus, in the Dunkeld Litany, he is invoked as Cumminach.

Note: I have posted a translation of the Life of Saint Colum Cille by Saint Cuimine in two parts here and here.