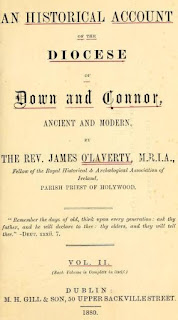 December 15 is the feast of Saint Flann, a seventh/eighth century successor to Saint Comgall as abbot of Bangor. The Martyology of Oengus says that at this date we commemorate 'the feast of Flann the modest ruler, the abiding successor at Bangor.' His death in the eighth century is recorded in the Annals  which also link him to Antrim:

One of the most glowing tributes to the monastic foundation over which Saint Flann ruled was written by Saint Bernard of Clairvaux in his Life of Saint Malachy. The quotation below has been taken from the diocesan history of Down and Connor by Father O'Laverty:

"There had existed in this place, under the founder Comgellus, a most noble institution, inhabited by many thousands of monks, the head of many monasteries, a place truly sanctified and so fruitful in saints, which brought forth fruit so abundantly to God, that one of the sons of that holy congregation, Luanus by name, had himself alone founded one hundred monasteries, which I mention for this reason, that the reader may from this single instance form a conception of the number to which the remainder of the community amounted. In short, so widely had its branches extended through Ireland and Scotland, that these times appear to have been expressly foreshadowed in the verses of David—' Thou visited the earth, and hast plentifully watered it,' &c. Nor was it only into the countries I have mentioned, but even into distant lands, that crowds of saints, like an inundation, poured, one of whom, St. Columbanus, penetrating into these our regions of Gaul, built the monastery of Luxieu, and there became a great multitude. So great do they say it was, that the solemnisation of the Divine offices was kept up by companies, who relieved each other in succession, so that not one moment, day or night, was there an intermission of their devotions."