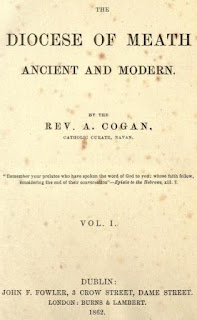 December 16 is the feast of a County Meath saint, Rodaighe of Ghreallaigh Bhunna. Diocesan historian Father Anthony Cogan remarks of this saint and his locality:

The ancient name of this place was Ghreallaigh Bhunna, Grellech, and Anglicised Girley. The patron saint is St. Rodaighe, abbreviated Raed, whose festival was celebrated on the 16th of December. In the list of guarantees and sureties given in the Irish Charters in the Book of Kells, on the occasion of the purchase of land near Donaghmore, at Navan from O'Riaman by the priest of Kells and his kinsmen, occur, "and the Erenagh of Grellech (Girley), and the Sech-nabb (i.e. the viceabbot), and the crozier of Reodaidhe". There was therefore in the early period a monastery at Girley of which St. Raed was abbot. Up to a few years ago his holy well was frequented, in the language of the peasantry, "nine clear days before Christmas". See the Miscellany of the Irish Archaeological Society, vol. i., p. 135. Martyrology of Donegal at 16th of December.

The Miscellany records in its notes:

" Grellech Now called in Irish Greille, and anglicised Girley by metathesis. It is the name of a parish lying a short distance to the south of Kells.

Reodaidhe. — This saint is still vividly remembered in the parish of Girley, near Kells, of which he is still regarded as the patron, but his name is now shortened to Raed. In the Irish Calendar of the O'Clerys he is set down as St. Rodaighe of Greallach-buna, at 16th of December, thus:

"Dec. 16. St. Rodaighe of Greallach-buna, the son of Failbhe, son of Ronan, of the race of Niall of the Nine Hostages."

The Editor could learn nothing of the crozier of this saint in the parish of Girley.