A Seminar on the Shrine of Saint Manchan 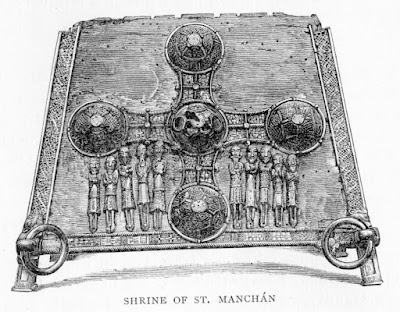 24 January is the feast of Saint Manchan of Lemanaghan, a saint whose memory still flourishes today and whose name is most famously associated with the splendid shine preserved for veneration at the parish church in Boher, County Offaly. Below is an account of a 2003 Irish Studies Seminar held at Columbia University when Professor Karen Overbey spoke on the topic of Saint Manchan's shrine. She helps to place this relic into an historical context, particularly interesting is the political dimension and the relationship between the monastery of Lemanghan and its much more famous neighbour at Clonmacnoise.

Prof. Overbey presented a talk with slides. St Manchan’s Shrine, which is kept in the parish church in Boher, Co. Offaly, very near to the site of St Manchan’s medieval monastry at Lemanaghan, is the largest surviving Irish reliquary—the richly decorated, containers for the remains of a saint. Holy relics, and even their reliquaries, were the prized possessions of medieval monasteries; the presence of the saint guaranteed the sanctity of the monastic space, and allowed a connection between the earthly inhabitants and the world of the divine.

Many of the shrines features mark it as exceptional. Professor Overbey noted, however, that the oddities of the shrine—its size, its form, its decoration, its figures—rather than spurring exploration, has spurred categorization. Prof. Overbey suggested that through a re-evaluation of the literary, folkloric, political and geographic contexts, St Manchan’s shrine would become less “bewildering.”

St Manchan’s shrine was clearly intended to be carried and displayed—at each junction of base and leg there is a stout brass ring through which a pole could be slid, allowing the shrine to be hoisted and carried. St Manchan’s shrine is approximately five times larger than the tomb-shaped shrines, and its display, on the shoulders of four monks presumably in a procession—would have been public and communal. The small tomb-shaped shrines in contrast were designed to be carried individually, and perhaps somewhat privately or protectively, as on a journey.

St Manchan himself was a founder of monastry approximately twelve miles east of the community of Clonmacnois; the site was called Lemanaghan. Despite its small size, Lemanaghan appears to have had a close relationship with the nearby prominent monastery of Clonmacnois. While the story does not survive in any medieval hagiography, a legend, recorded in the early twentieth century by a local historian, suggests a folkloric “sibling rivalry” between Sts Ciaran (the founder of Clonmacnois) and Manchan, in the tale of a dispute about the boundaries of the respective territories. This may well have some historical basis. In the early eleventh century, King Maelsechnaill donated several more parcels of land in the parish of Lemanaghan to the community of St. Ciaran, specifically as a payment for rights of royal burial in the Clonmacnois graveyard. Seen in this context, the form of St Manchan’s shrine takes on a new possible resonance, which may help to explain the differences from the earlier tradition of tomb-shaped reliquaries. Instead of a fixed burial site located in a bounded graveyard or at the side of a church, St Manchan’s tomb was moveable. It could travel around the boundaries not only of the church, but of the territory, allowing an extension of the sacred and protected space of the monastic graveyard. Prof. Overbey suggested that the burial space of St Manchan’s Shrine functioned to dilate the boundary of the Clonmacnois graveyard, extending the sacred space to the edges of Clonmacnois’s territory.

Prof. Overbey also suggested that the form of St Manchan’s Shrine, coupled with its historical context, imply a strategic political function for the reliquary. In its fusion of divine protection and political expansion, St Manchan’s Shrine proclaims that it was the destiny of Ua Conchobair, Clonmacnois’ patron in the twelfth century, to occupy the province of Meath forever, and that the saint and the king would be dual guardians of the territory and its people.

The Annals of the Four Masters tells us that, in 1166, “The shrine of Manchan…was covered by Ruaidhri Ua Conchobair, a prime contender for high-kingship of the whole island. Ruaidhri’s bid for military and political dominance in Ireland was contested. So it wouldn’t be unusual for Ruaidhri to become an ecclesiastical patron, enchancing his position with grants and gold. We might therefore view the figures on St Manchan’s shrine as having not religious, but military significance. The figures might represent a particularly valuable type of warrior: one with experience, prowess, and identifiable status. Yet, these warriors are not poised to strike. This symbolic troop may function as a kind of visual reminder, or even visual surrogate, of a military exchange of vassals and soldiers between Ruaidhri and his Connacht and Breffney rivals. St Manchan’s shrine is both the site and visualization of the political contract that allowed these rivals to join forces under the protection and assurance of St Manchan, their co-patron. Prof. Overbey answered questions from the floor. A sampling follows.

Q: What are the figures wearing around their necks?
A: They don’t have anything on their necks. That’s actually the nail pole. Those rings were used for carrying the shrine.

Q: Was the touching of relics and bones common?
A: It appears that early on they were readily touchable, but they regularly get stolen and traded. For instance, St Manchan’s is sealed. This starts happening in the tenth century. Viewing crystals appear in the fourteenth century.

Q: Is there a change in making reliquaries after the arrival of the Normans?
A: Unfortunately, we don’t have enough evidence to say. There does appear to be subtle changes in the representation of saints. There are only three or four examples of post-Norman shrines.

Q: Is the bone house in Clare identified?
A: No, I actually had to go and track it down in the Burren.

Q: You say that these figures are mature warriors but they’re not dressed for battle and they’re shirtless. Might they not just be peasants?
A: I guess I’d want to know why they have axes and sticks. This depiction of beard tugging is a common attribute of warriors. It might be just enough to indicate that they are warriors.

Email ThisBlogThis!Share to TwitterShare to FacebookShare to Pinterest
Labels: Relics, Saints of Offaly