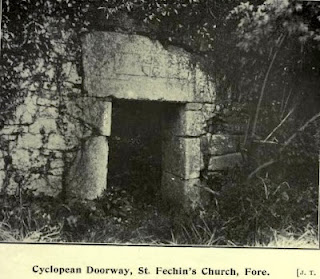 January 20 is the feast of Saint Fechin of Fore. An earlier post on his life, taken from the work of Archdeacon O'Rorke, can be found here.  This year we can look at the account of Saint Fechin's life given by Father John Lanigan, as quoted by Father Cogan in his diocesan history of County Meath:

FORE is a parish in the barony of Demifore, county of Westmeath. A monastery was founded here in the seventh century by St. Fechin, which in process of time became the centre of an episcopal see. The life of the distinguished founder is thus given by Dr. Lanigan:

St. Fechin, who is the first named among the priests of the third class of Irish saints, was a native of the territory in which St. Athracta had her nunnery, that is, of Lugne. Bile, or afterwards called Bile-Fechin, in the barony of Leney, is stated to have been the place of his birth. His father was Coelcharna, a descendant of Eochad Fionn, brother to the famous King Con of the Hundred Battles, and his mother Lassair, of the royal blood of Munster. When fit to be sent to school, Fechin was placed under St. Nathy of Achonry, in whose monastery he remained until he made a considerable progress in learning and piety. How long he continued there we are not correctly informed. According to one account, he staid with Nathy until he was ordained priest; but according to another, which appears more consistent, he left that school several years before he was ordained, and went to that of some other holy man. Having finished his studies, and being raised to the priesthood, he left his own country for the purpose of leading a retired life, and arriving at Fobhar, now Fore, in the county of Westmeath, stopped there, being very kindly received by the proprietors of that place. Here he erected a monastery, to which such numbers of persons were attracted by his reputation, that after some time his community consisted of about three hundred monks, who, as well as their holy abbot, subsisted on their own labour, and were sometimes reduced to great penury. Some other monasteries or churches are attributed to St. Fechin, but, with the exception of one or two of them, I greatly doubt whether they were of his foundation. That he established a religious house in the island of Immagh, near the coast of Galway, cannot be questioned. The inhabitants were still pagans when Fechin, taking with him some of his monks of Fore, undertook their conversion. At first he met with great opposition, and the people were so obstinate that they refused to supply him and his companions with even the necessaries of life, so that two of them died of want of food, whom, however, the Almighty was pleased, through the saint's intercession, to bring again to life. But Guaire, King of Connaught, being apprised of their distress, sent them abundance of provisions. When setting about the construction of a monastery, the islanders threw their implements and utensils into the sea, which, it is said, were driven back on land. At length Fechin succeeded in bringing all of them over to the Christian faith, and baptized them. Their zeal became so fervent that they consigned themselves and their island to him as their master and superior.

Among the many transactions in which Fechin is said to have been engaged, it is related that, on occasion of Donald the Second, King of all Ireland, having marched with a great army into the country of the Southern or Meath Nialls, for the purpose of fixing the boundaries of their principality, they applied for protection to the saint, who happened to be then at a place called Tibrada, where, perhaps he had some small establishment. Fechin complied with their request, and acted so powerfully on the king's mind as to induce him to desist from any further proceeding against the Southern Nialls, between whom and the king he procured a perfect reconciliation. His influence was very great with the kings and princes of his time. An instance of this is given in the case of a young man named Erlomhan, whom Moenach, King of Munster, immediately discharged from prison on perceiving that Fechin wished for this act of grace. Erlomhan afterwards embraced the monastic state under Fechin. In like manner he obtained from the joint kings of Ireland, Diermit the Second and Blaithmac, the liberation of one Aedus or Aedan, a brave military man, who, on being dismissed from prison and given up to Fechin, went with him to Fore, where he became a monk. Several holy men are mentioned as united in friendship with Fechin, for instance, Coeman or Comain Breac, abbot of Roseach, in Meath, Ultan of Ardbraccan, Fintan Munnu, Ronan, son Berach, and particularly Mochua, Abbot of Ardslaine. Fechin's life was one continued course of austerity, and he was so fond of solitude that he often used to retire from his monastery, either of Fore or Immagh, to lonesome situations, passing his time in prayer, fasting, and other mortifications, and taking no food except now and then a little bread and water. Many miracles have been attributed to him. This great saint died on the 20th of January, A.D. 665, of the dreadful pestilence that raged all over Ireland. His memory has been most highly respected, and the monastery of Fore, which continued down to the time of the general suppression, was greatly celebrated, and in the course of ages became very splendid and wealthy.

Fore is still a great place to visit and see the remains of what must have been a very impressive foundation!