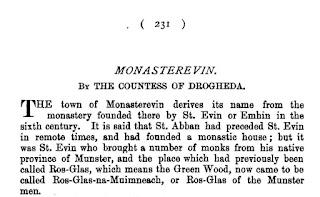 December 22 is the feast of Saint Evin, founder of Monasterevin, County Louth. Below is an excerpt from an early twentieth-century paper submitted to the Journal of the County Kildare Archaeological Society. The author was a member of the landed aristocratic class, for at this time it was commonplace for local antiquarian societies to enjoy the active patronage of the great and the good. In her article the Countess of Drogheda takes the story of Monasterevin up to the seventeenth century, but I have omitted the later history in order to focus on Saint Evin.  There is a link to the online source for the journal at the end of the post so if you wish to keep reading you can continue at the Internet Archive:

By the COUNTESS OF DROGHEDA

THE town of Monasterevin derives its name from the monastery founded there by St. Evin or Emhin in the sixth century. It is said that St. Abban had preceded St. Evin in remote times, and had founded a monastic house; but it was St. Evin who brought a number of monks from his native province of Munster, and the place which had previously been called Bos-Glas, which means the Green Wood, now came to be called Bos-Glas-na-Muimneachy or Bos-Glas of the Munster men.

"Saint Evin betook himself to Leinster, and at the bank of the River Barrow he raised a noble monastery, called in that age Ros-Glas, and which, from the number of monks who followed the man of God from his own country of Munster, was called Ros-Glas of the Munster men.

This holy man was famous for many and great miracles, and the monastery on account of the reverence paid to its first founder, stood in so great honour with posterity, that it was held a most safe sanctuary, and no one presumed to offer violence or injury to the holy place, who did not soon afterwards suffer the severity of the Divine vengeance."

It was also said that after his death there was a bell belonging to St. Evin '' which was held in so great veneration that posterity were accustomed to swear on it as a kind of inviolable oath, and to conclude controversies by the virtue of this oath.''

St. Molua of Clonfert (4th Aug.) speaks of '' having visited the Abbot of St. Evin in his monastery not far from the Barrow, which that most holy man, St. Abban, had originally founded."

The year of St. Evin's death is not recorded anywhere; but his festival was held on the 22nd of December, and his death probably occurred in the sixth century. St. Evin wrote a Life of  St Patrick, partly in Latin and partly in Irish ; and it is said to contain many more details of St. Patrick's life and mission than there are in any other Life of the Saint. In the Calendar of Angus he is called '' Pure Emhin from the brink of the dumb Barrow." The well that springs at a little distance from the present mansion was in all probability originally St. Evin's well.

The precise period at which the original Monastery of St. Evin fell into decay is not known; probably it was amongst the many religious houses that suffered from the depredations of the Danes in the ninth and tenth centuries. The "Annals of Clonmacnoise," at the paragraph chronicling the year 1002,
well describes the work of destrnction perpetrated by these infidel hordes in these words —

"The whole realme was overrunn by the Danes. The Churches, Abbeys, and other religious places were by them quite razed and destroyed, or otherwise turned to base and servile purposes.

"Almost all the gentlemen of any account were turned out of their Lands. Yea, some of the best sort were compelled to servitude and bounden slavery. Indeed it was strange how men of any fashion could use other men as the Danes did use the Irish men at that time. But King Bryan Borua was a Salve to cure such sores: all the physick in the world could not help it elsewhere: in a short time he banished the Danes; made up the Churches and Religious houses; restored the people to their antient possessions, and, in fine, brought all to a notable reformation."

Some years later the monastery having again become ruined, it was refounded towards the close of the twelfth century by Dermod O'Dempsey, Lord of Offaly, as a Cistercian Monastery, and called Ros-Glas or de Rosea alle.

The Charter of Foundation of the monastery was as follows : —

"Dermot O'Dempsey, King of Offaly, to all his nobles, clergy, and laity, both present and to come. Greeting, I make known to you all, that I, Dermot O'Dempsey, King of Offaly, by the consent of Murdoch O'Conor have given and confirmed to God and the Monks of the B.V.M. of Rosglas, land on which to build a Monastery in honour of the Blessed Mary ever Virgin, and of St. Benedict the Abbot, as a perpetual eleemosynary. These are the lands which I Dermot O'Dempsey have given and confirmed to the aforesaid Monks of Rosglas in remission of my Sins and of the Sins of my Parents, the site of the Monastery of Rosglas, and all the lands with their appurtenances, and with the men belonging to the same lands. All these I give and confirm to the aforesaid Monks, to be held as a free, pure, and perpetual eleemosynary for the health of my soul, and the souls of my predecessors. Wherefore I will and command that the aforesaid Church of Rosglas and the Monks and brethren serving God therein, may have and hold the aforesaid lands, with all their liberties, viz., in woods and plains, meadows and pastures, and morasses in waters and fisheries, in roads and paths, in ponds and mills, in turbaries, and all mountains and valleys, and in all other places and things appertaining to the same lands, free quit and solutias from any customs and exactions, and from all secular duty.

"The Annals of the Four Masters" record the death of this Dernot O'Dempsey in the year 1193, and in 1199 it was mentioned that the Abbott of Ros-Glae "was at his request allowed by the General Chapter of the order to celebrate in his own house the Feast of St. Evin," which shows that the original founder was still held in high veneration....