Saint Finnian of Clonard - Tutor of the Saints of Ireland? 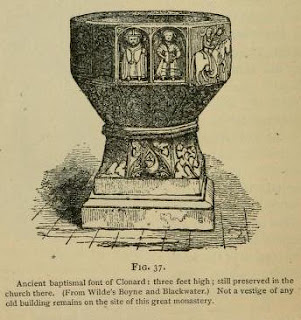 2640. Thereafter the saints of Ireland came to Findian from every point to learn wisdom by him, so that there were three thousand saints along with him; and of them, as the learned know, he chose the twelve high bishops of Ireland. And the learned and the writings declare that no one of those three thousands went from him without a crozier, or a gospel, or some well-known sign; and round those reliquaries they built their churches and their monasteries afterwards. [1]

Thus does the Irish Life of Saint Finnian, as preserved in the Book of Lismore, record the tradition of the master of Clonard as the 'tutor of the saints of Ireland' and commissioner of its 'twelve apostles'. J. F. Kenney, in his classic study of the sources for early Irish history, commented:


This became a fundamental idea of Irish hagiography and almost every saint living within a century of his time is represented to have been a pupil of the founder of Clonard. [2]

But, bearing in mind that one of the first rules of hagiography is that it reflects the times of its writer rather than the times of its subject, how far back can this tradition actually be traced? The Life of Saint Finnian survives in both Irish and Latin versions, but within manuscript collections of a much later period than their sixth-century subject. The Latin Life is found in the fourteenth-century Codex Salamanticensis, the Irish Life in the fifteenth-century Book of Lismore. Other manuscript copies and variants of both are also extant. In the 1950s Kathleen Hughes undertook a series of studies of Saint Finnian [3] and argued that the Irish Life was earlier than the Latin, going back to an original of the ninth or tenth century. She believed it was compiled at Clonard by a monastic writer steeped in the history and traditions of his house and its founder. The Latin Life, whilst it may have originally been in circulation before the Anglo-Normans came to Ireland in the twelfth century, was reworked under their influence and in her view lacked the 'primitive' elements of the Irish. Contemporary scholar, Padráig Ó Riain, however, is unconvinced by this thesis and favours the view that the Irish Life could represent an adaptation of a Latin Life which is not itself early. Indeed, the composition of the Lives may owe less to a ninth or tenth-century monk of Clonard drawing on a body of proudly-remembered local tradition about his founder, and more to the orders of Augustinian canons founded in the twelfth century in Clonard and other locations associated with Saint Finnian. In this context, what Ó Riain describes as the


'almost unholy haste with which Finnian is transported to south Wales, and shown to be on the best of terms with three of the principal saints of that area, David, Cadog and Gildas'

would have played well with the Anglo-Normans, most of whom had family connections in that area. [4] The various Lives of Saint Finnian would require more systematic and extensive study before more definitive conclusions can be reached. It is interesting though to see that the Normans and the continental religious orders who followed in their wake, both of whom are presented as the destroyers of the spirit and legacy of the 'Celtic church' in popular myth, in this case may actually have been the people behind the preservation of some of those charming stories of our early native saints.

On the blog I have posted a paper on the life of Saint Finnian here and an account of his monastic school here. There is also an introductory post on the Twelve Apostles of Ireland here. The illustration of the Clonard baptismal font has been taken from P.W. Joyce, A Smaller Social History of Ireland (1906), p.138.

[3] The studies comprise the following:

These have been conveniently collected in a single volume issued by Variorum Reprints as Kathleen Hughes, Church and Society in Ireland A.D. 400-1200 (London 1987), edited by David Dumville.

Did you see the program on BBC Alba ( I think) about Columcille? Finian’s featured largely. What was fascinating was that the program was in English, Irish and Scots Gaelic.

I have recorded it but not yet watched it. Agree that it is wonderful to have the three languages, the Catholic Truth Society published a new Novena to St Columba earlier this year which was also in Scots Gaelic, Irish and English. Long may this trend continue!