The Women Saints of Ireland: A Schoolgirl's View 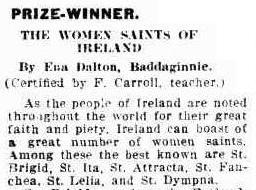 As November is the month to remember all the saints I cannot allow it to close without an acknowledgment of our Irish women saints. Below is a charming view of them as seen through the eyes of a 1920s Australian schoolgirl winner of an essay competition. The victorious Miss Ena Dalton provided short accounts of six of our best-known holy women - Saints Brigid, Ita, Attracta, Fanchea, Dympna and Lelia - and I note that her presentation of Saint Brigid is entirely a Christian one, without a single mention of a goddess. She concludes with a clarion call for "Irish and Australian maidens" to "revive the ancient glory" and carry the "faith and fame" of both countries to distant lands. I can think of no better illustration to accompany this essay than a post by another Irish woman blogger on the saints, Finola at Roaringwater Journal, whose Rejecting those Earthly Dignities: Irish Women Saints by Harry Clarke provides a visual feast. Read it here.

THE WOMEN SAINTS OF IRELAND

As the people of Ireland are noted throughout the world for their great faith and piety, Ireland can boast of a great number of women saints. Among these the best known are St. Brigid, St. Ita, St. Attracta, St. Fanchea, St. Lelia, and St. Dympna.

St. Brigid was born in Fochard, Ulster, about the year 453. She shares with St. Patrick the glory and sanctity of being first to form a community of nuns. Her success was miraculous, for many religious establishments were soon extended over the land.

She received her religious veil very early in life from the hands of St. Mel, nephew and disciple of St. Patrick. She built herself a cell under a large oak, thence called Killdara. Being joined soon after by several pious young virgins, she was at once acknowledged as their mother and founder. Like St. Patrick, Brigid spent much of her time travelling through Ireland, converting and instructing the people.

The fame of her miracles, her virtues. and her piety soon spread over the land, and many voung girls, inspired with similar religious zeal, hastened to join her in her great mission. Thus, there sprang up numerous religions communities, which were primitive in their manner of living, as also in the severity of their rules and discipline. Their time was spent in prayer, acts of charity, and acts of mortification.

Innumerable traditions of St. Brigid's charity and generosity have been handed down to us. The holy attainment she sought on earth was to do the will of God. His grace was her staff through life. All her labours and her sacrifices were rewarded, as the love of her Saviour alone filled her heart. She died in 525, after a very holy life. St. Brigid had the privilege of outward resemblance to Our Blessed Lady, and her great purity merits for her the title of "The Mary of Erin."

St. Ita, called the Brigid of Munster, is the Patroness of Limerick, where her memory is fondly cherished to this day. Immense crowds of people still assemble on her feast day at  Kileedy, where the ruins of her ancient church are still to be seen.

Ita was a direct descendant of Con of the Hundred Battles. She was born in A.D. 480 in County Waterford. The name conferred on her at baptism was Deirdre, or Dorothea; but owing to her longing desire for the gift of Divine love, she came to be called Ita, which signifies thirst, or longing. Even in her infancy, many miracles attested her sanctity. Once, we are told, the room in which she slept was filled with a flood of supernatural radiance. For some time after this the child's features were lighted up by a marked angelic beauty.

When Ita founded her convent at Hy-Connail, she was soon joined by many holy maidens eager to imitate her. Her whole life presents an example of affection and charity, which, we may say, are the most beautiful traits of our Irish saints. She died on the 15th January, A.D. 569, and was laid to rest within the little church of the monastery which she had chosen as her earthly habitation.

St Fanchea was the sister of St. Enda, and the daughter of Conall of Orriell. She lived about the fifth or sixth century, and was the abbess of her monastery. Being warmly attached to her brother, Fanchea had him to visit her constantly. Once, it is related, when Enda passed her convent with his clansmen she refused to see him till he assured her that he would never shed the blood of any man. Finally, she was the means of converting him, and he then entered religion.

When once he was visiting Fanchea's convent, he saw a beautiful young lady, who was under his sister's care. He immediately wished to marry her. Fanchea spoke to the young girl, and advised her to enter religion, and take a heavenly path in life. This she did, and this was the first step to Enda's conversion.

St. Attracta, whose feast is on the 11th of August, was one of the numerous band of holy virgins who consecrated their lives to God while St. Patrick still lived. She devoted her time to the poor and the infirm. Even during her life, she worked many wonders. Among others, by her prayers she freed Connaught, her native province, from a wild beast, which was the terror of the inhabitants. Once, as the monster was rushing towards the sanctuary. Attracta went on her knees, prayed earnestly to God, and the wild beast was suddenly struck dead,

St. Dympna—The virgin, Dympna, born in Ireland of royal heathen parents, grew "as a rose amongst thorns." Despising the allurements of a pagan court, she secretly received baptism, and devoted herself to Christ.

Fleeing from a wicked man, who desired to be her lover, Dympna, in company with the blessed Gerebernus and others, took ship to Antwerp. From there they proceeded to Ghela, where, establishing a home, she gave herself up to Divine contemplation, and lived an angelic life.

After three months, the King, her father, followed her, and, after giving orders for the execution of Gerebernus. himself beheaded Dympna.

St. Lelia, so well known in the Diocese of Limerick, her native place, was a young virgin, whose feast is celebrated in her native county on the 12th of August.

Echoes of the lives of the women saints of Ireland still resound, not only through Ireland, but in our own Australia. Bride and Brigid, Ita, Fanchea, Lelia and Dympna are favourite names in many Catholic families. Colleges and schools are dedicated to St. Brigid and St. Ita, for these virgin saints excelled in learning as well as in sanctity. May Irish and Australian maidens revive the ancient glory, and carry the faith and fame of Erin and Australia to distant lands!

Thanks for the share! Lelia is a new one to me. I’m afraid my version of Dympna is a bit more explicit than Erna’s.

Yes, Lelia is an odd one, persistent cult although actually little known about her. Was granted a Mass and Office in the 19thc. 11 August feast day.