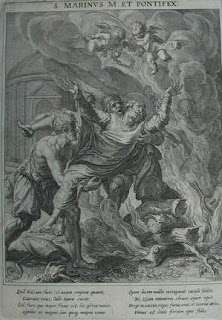 At August 16 I noted that Canon O'Hanlon had found evidence from the manuscripts of the Irish Franciscan seventeenth-century hagiologist, Father John Colgan, that he intended to write about two little-known Irish missionaries to Bavaria on that date. The two are Saints Marinus and Anianus, the former described as a bishop and the latter an archdeacon, both of them were unknown to O'Hanlon. On February 23, 1863, his contemporary, the scholarly Anglican Bishop, William Reeves, delivered a paper on these two little-known saints to a meeting of the Royal Irish Academy. In it he discusses the evidence for their lives, martyrdom and translation of their relics, plus some speculations on the Irish names which may lie behind the Latinizations Marinus and Anianus. November 15 is the date of the martyrdom of Saint Marinus and the accepted feast day for the pair in Germany:

On SS. Marinus and Anianus, two Irish Missionaries of the Seventh Century.

The Academy owes to the vigilance of its excellent Librarian the recent acquisition of a volume which, independently of the value arising from its great rarity, possesses the merit of introducing to notice in this country two Irish Missionaries, whose names have escaped our ecclesiastical writers, and who, notwithstanding the deficiency of detail in their history, have yet a sufficient reality to render them a welcome accession to our recorded list of Irish worthies.

The volume comprises three tracts. The first bears the title — “Das leben der Heiligen S.S. Marini Bischoues Martyrers, und Aniani Archidiaconns, Bekkeners die aus Irland in Bayrn kommen des Gotshauaes Rodt Patronm wordenseind. Durch Johan á Via der H. Schrifft Doctorn beschrieben". The lower half of the title-page is occupied by an engraved plate, having in the middle a shield, which bears quarterly the arms of the monastery of Rot, and of Christopher the abbot, supported by two ecclesiastics, the dexter one vested in an episcopal, the sinister one in a sacerdotal habit. Between them is the inscription, “Christophorus.  S. Abbas. S. Marinvs. S. Anianvs. Patro. in Rot. 1579." This German life, with the dedication, occupies nineteen leaves.

The second tract is a Latin version of the same life, and bears the title — " Vita S. S. Marini Episcopi Hybernobavari, Martyris, et Aniani Archidiaconi Confessoris, Patronorum Celebris Monasterii in Rota. Per Johan a Via Doct. Theol. conscripta, Monachii excudebat Adamus Berg. Anno M.D. LXXIX." It has the same frontispiece as the former, except that it omits the date. To this tract is appended (fol 12 b) a "Sermo brevis cujusdam pii patris in Monasterio Rott ad Fratres ibidem pronunciatus.” The verso of the concluding folio (15) contains the enactment of the Council of Trent, Session 25, "De Invocatione, etc, Sanctorum."

The author, in his dedication to the abbot Christopher, expresses his regret that the notices of the patrons of this monastery which were scattered through the ancient annals belonging to the institution had not been put together in any regular order, and that they who had been set upon a candlestick to give light to all that were in the house, should, through the neglect of past generations, have been kept hidden under a bushel. He states that the acts of SS. Marinus and Anianus were preserved in three very ancient manuscripts, together with a sermon on the same subject by a learned and pious member of the fraternity, which he has annexed as a separate chapter to the Latin life. Munich, 6th of April, 1579.

The following abstract of the Life contains the principal particulars of their history. Having alluded to the banishment and death of Pope Martin in 653, the narrative proceeds to say:

Finding their labours among the pastoral inhabitants of the neighbourhood successful, they resolved upon settling in this region for the rest of their days, and erected huts for themselves over two caves about two Italian miles asunder. Here they led a life of solitude and self-mortification, meeting only on Lord's days and festivals, when they joined in the services of the altar. And thus they continued, teaching both by precept and example, and crowned with success in their endeavours to convert the surrounding people, until at length a horde of barbarians, driven from the Roman provinces on the south, entered this territory, and proceeded to lay it waste. In their wanderings they arrived at the cell of S. Marinus, and the life thus relates the cruel treatment which he experienced at their hands : —

It happened that at the same time S. Anianus, who had escaped the notice of the barbarians, was released by a natural death from the trials of this life; and thus both master and disciple on the same day— namely, the 17th of the Calends of December, that is, the 15th of November, which afterwards became the day of their commemoration — passed to a happy immortality, while their remains were consigned to a common tomb, where they rested for above a hundred years. At the end of this period, the circumstances of their death and interment were made known to an eminent and devout priest named Priam, who resided in a neighbouring village. He, it is stated, communicated the matter to a bishop called Tollusius, who repaired to the spot, and having ordered a solemn fast, on the third day exhumed the remains with due solemnity, and conveyed them to the village of Aurisium, now known as Ros, where they were deposited in a sarcophagus of white polished marble, within the church of that place. This invention is loosely stated to have occurred in the time of Pepin and Caroloman, kings of the Franks, when Egilolph was in Italy; and it is added — " Priamus praesbyter, jussus a domino Episcopo Tollusio, vidi omnia et scripsi: et testimonium his gestis perhibeo, et testimonium meum verum est, quod ipse scit, qui benedictus est in saecula, Amen."

From this place the reliques of the two saints were subsequently transferred to a spot near the river Aenus (now the Inn), which obtained the name of Rota from a little stream that flowed past it into the Inn, and here they were to be seen beneath the high altar of the choir.

A Benedictine Monastery was founded at Rot, in 1073, by Chuno or Conon, Count of Wasserburg and his charter, of that date, makes mention of the “altare SS. Marini et Aniani."

In a bull of confirmation granted by Pope Innocent II., in 1142, Rot is styled " praefatum SS. Marini et Aniani monasterium." Mabillon, who states that he visited this monastery in one of his journeys, describes it as the Benedictine Monastery of SS. Marinns and Anianus, but he takes no notice of the patron saints themselves in the earlier part of his “Annals.” Baderos, however, gives a short memoir of them, which he illustrates by two engravings, ' representing respectively the martyrdom of S. Marinus, and the angelic vision of S. Anianus, to which he assigns the date 697.

Under the year 784, this author makes mention of another Marianus, who also was an Irishman. He came to Bavaria in company with St. Virgil of Saltzburg, and was one of the two companions who were sent by him with Declan to Frisingen. The festival of this Marinus was the 1st of December, and his ashes were believed to be efficacious in curing certain diseases.

As regards the names, it is not clear what is the Irish equivalent for Anianus; but Marinus is beyond all question a Latin translation of Muiredhach, which is derived from muir (mare), and signifies "belonging to the sea." The name is of very early occurrence: thus, Muiredhach, the first bishop and patron of Killala, who is commemorated at August 12, is mentioned under the form of Muirethacus in the early part of the eighth century. In like manner, the name of the celebrated Briton, Pelagius, is understood to be a Greek form of the British Morgan, which is equivalent to Marigena. We have in the Irish calendar a name closely allied to Morgan, in the form Muirgein, which means “sea-born,” and is of conmion gender, for it is applied in one instance to an abbot of Gleann hUissen, now Killeshin; and in another to the celebrated Mermaid, in whose case it is interpreted liban, that is, "sea-woman."

The name Marinus is to be distinguished from Marianus, as the latter is derived from the name Maria, and represents, in a Latin form, the Irish Mael-Muire, "servant of Mary.”