The Death of Saint Laurence O'Toole 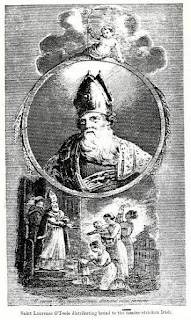 "...Having embarked from England, St Laurence landed on the coast of Normandy, at a creek which at the present time derives its name "St. Laurent' from him. Shortly afterwards he was seized with the illness which proved fatal to him; and as he found himself unable to proceed on his journey, his progress was arrested at an elevated spot in the neighbourhood of the abbey of Eu. Seeing the towers of this abbey arise in the distance, he made inquiry from some shepherds on the road-side, to what religious order the community belonged. He was told that the abbey was occupied by monks regular, of the order of St. Victor. "Here then", said the archbishop, "shall my labours terminate". He approached the abbey gate, and knocked for admission. He was joyfully embraced on entering by the Abbot Osbert, and by his community. But, feeble as was the health of the good archbishop, he must needs repair immediately to the church, where he offered his thanksgivings to God, for having favoured him with a safe voyage, and for having preserved him from the dangers of the sea.

He began to sink into such a state of exhaustion, that in a short time he was confined to bed, and became unable to rise from it, through excessive weakness. Yet, even in this state, he was not unmindful of the duties he owed his country. At his request, a venerable and prudent man named David, the tutor of his royal companion, was despatched to Henry, charged with the recommendations of the dying archbishop, and as the bearer of an earnest suit in behalf of the Irish subjects of the king. The latter, touched with commiseration on learning the condition of the patriotic prelate, or convinced of the justice of his demand, sent the messenger back, after four days' delay, with cheering assurances, to soothe the last hours of the dying saint. When his sorrowing attendants discovered the hopelessness of his recovery, they deemed it expedient to remind him of the necessity of making a testamentary disposal of his effects. "God knows", he replied, "out of all my revenues, I have not a single coin to bequeath". With sentiments of extraordinary fervour, he prepared for the reception of the holy Eucharist and extreme unction. He frequently cried out in the words of the Psalmist: "have mercy on me, O my God, have mercy on me, since my soul hath trusted in thee", so long as he felt able to articulate. Shortly before his death his attendants heard him exclaim, in the Irish language: "Ah! foolish and insensible people, what now shall become of you? Who will relieve your miseries? Who will heal you?" Probably at the moment, his thoughts reverted to the paupers his charity had supported during his life-time, and especially during the three years of famine, when, according to his biographer, he gave alms to 500 people each day, besides furnishing clothes, provisions, and necessaries to 300 others, in various parts of his diocese, and being at the expense of maintaining and protecting 200 children, who were left at his door by their destitute parents.

St. Laurence O'Toole ended his mortal captivity on the 14th day of November, 1180. His biographer tells us that he died on the feria sexta , or Friday, at the close of the midnight hour.....

Email ThisBlogThis!Share to TwitterShare to FacebookShare to Pinterest
Labels: Saints of Dublin, Saints of the Twelfth Century