A Celtic Weather Saint: Cewydd of the Rain 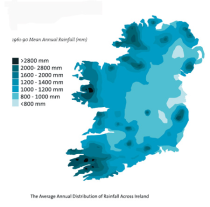 The summer of 2012 was one of the wettest on record and so I enjoyed this nineteenth-century antiquarian account of a 'Celtic' challenger to the claim of the Saxon Saint Swithin to be chief of the 'weather saints'. Scholars are unable to trace the exact origins of the legend that if it rains on the feast of Saint Swithin, celebrated on July 15, it will rain for forty days.  In the notes and queries section of the 1888 volume of the Welsh journal, Archaeologia Cambrensis, however, writer M. L. Dawson argued that Cewydd, an obscure saint of Anglesey, has a prior claim. I enjoyed the way in which the author starts by saying that it would be foolish to challenge Saint Swithin's standing, yet obviously relishes the chance to demonstrate that the Saxon saint was just a johnny-come-lately compared with those of the natives. Saint Cewydd is furnished with a splendid pedigree which even includes the family of King Arthur, particularly interesting to me is that he also claims to be the brother of the Irish saint, Aidan (Maedoc) of Ferns, whose feast we will celebrate at the end of next month:

A Celtic Weather Saint. — Most countries possess their special weather saint, whose festival, according as it is dry or wet, decides the meteorological character of the following forty days. St. Swithin has now so long reigned supreme as the weather saint of Great Britain, that it would, perhaps, be vain to denounce him as the Saxon usurper of the rights of a Celtic weather saint, who presided over the rainfall of our country as far back as the time of King Arthur. Nevertheless, it seems probable that the honourable distinction of weather saint belongs rather to the Celtic “St. Cewydd of the Rain" than to the Saxon bishop of comparatively modern times.

St. Cewydd was one of a remarkable family, being the son of Caw, lord of Cwm Cawlwyd or Cowllwg, who, according to Achau y Saint, was "deprived of his territories by the Gwyddyl Ffichti, or, as the general term may be interpreted, by the Picts and Scots; in consequence of which he and his numerous family retired to Wales. He settled at Twrcelyn, in Anglesey, where lands were bestowed upon him by Maelgwn Gwynedd; and it is also said that lands were granted to some of his children by Arthur in Siluria”. Most of them distinguished themselves in one way or another, and founded churches, of which they became the patron saints. St. Cewydd's eldest brother, Hywel, was killed in a civil war by King Arthur; his brother Aneurin, otherwise known as Gildas, became the most celebrated scholar of the day; another brother, Aeddan, was first Bishop of Ferns; while his sister, Cwyllog, was married to King Arthur's nephew, the traitor Modred. Unfortunately, we know but little of the history of St. Cewydd himself, beyond the fact that he founded churches at Diserth, Aberedwy, in Radnorshire, and at Llangewydd, in Glamorganshire. Local nomenclature, however, would lead us to suppose that he lived in the neighbourhood of Diserth, for a farm in Llanfihangel Bryn Pabuan is still called Cil gewydd, i.e., the Cell of Cewydd, while a mountain- track above Llandeilo Graban, once trodden by the feet of the saint, perhaps, as he journeyed over the hills to visit his brother Maelog at his monastery of Llowes, yet bears the name of Rhiw Gewydd, i.e., Cewydd's Hill. But no tradition remains to tell us how the saint won his title of "Cewydd of the Rain", as he is called in old Welsh writings, and we are indebted to Lewis Glyn Cothi for our knowledge of the popular superstition which connected the rainfall with the festiyal of the saint. In a poem, or rather an elegy, written by him on the death of Morgan, son of Sir David Gam, he compares the tears shed over the departed hero to the forty days' rain which fell after St. Cewydd's festival:

The said festival took place on July 1, O.S.; therefore, allowing for the difference between Old and New Style, it now occurs on July 13, two days before St. Swithin's. Until quite lately, a feast or wake was held in Aberedwy parish the second week in July in honour of Saint Cewydd. That the popular belief in St. Cewydd's power over the weather was not confined to the Welsh portion of Great Britain is proved by an old English proverb, which, altogether ignoring St. Swithin's claims, says:

" If the first of July be rainy weather,
'T will rain more or less for a month together."