The Protecting Corselet of Mary 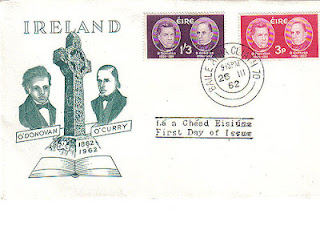 The prayer below was originally published by the great 19th-century scholar, Eugene O'Curry, who had learnt it from his father. When reprinted in The Irish Ecclesiastical Record, some additional verses were included from another source. The supplementary verses are mainly concerned with promises of protection to anyone who recites the prayer, this may strike the modern reader as smacking of superstition or sympathetic magic. Yet I have seen many examples of similar promises attached to some of our most famous hymns from the Irish Liber Hymnorum. One has to be careful, of course, of accepting that prayers which have reputedly come down from early times through a long oral tradition have done so intact. Whilst some of the imagery in this prayer is indeed reminiscent of that found in earlier Irish texts, other verses suggest a later origin. In verse 15, for example, there is a plea for the 'distressed nobles of Erin', this might be a reference to the 'Flight of the Earls' and the passing of the Gaelic order in the seventeenth century. Verse 17 certainly suggests that we are dealing with the Counter-Reformation rather than the 'Celtic Church'! The introduction claims that the prayer is 'some seven hundred or more years old', this would take it back to the 12th century, as the prayer was published in the 1860s. Overall, however, I suspect this is a later work, there is a later medieval feel about it as a whole.

THE PROTECTING CORSELET OF MARY.

The late Professor O'Curry, in the last Lecture which he delivered in the Catholic University a few days before his lamented death in July, 1862, when speaking of the music of ancient Erin, referred to " a beautiful ancient hymn to the Blessed Virgin, some seven hundred or more years' old." He added, with that simplicity which cast such a charm over all his words : "My father sang this hymn, and well too, almost every night, so that the words and the air have been impressed on my memory from the earliest dawn of life. This sweet poem consists of twelve stanzas of four lines each, beginning:' Direct me how to praise thee.'

The air of this hymn is not popular ; I never heard it sung but by my own father. I know it myself very well, and I know several old poems that will sing to it, such as the poems ascribed to Oisin, the son of Find Mac Cumhaill, and the great religious poem called ' The Festology of Oengus Ceile De written in the year 798."

Mr. Brian O'Looney, who with such untiring energy continues in the Catholic University the researches of the lamented O'Curry, has discovered a much larger number of stanzas than the twelve mentioned by the late Professor. To Mr. O'Looney we are indebted for the following translation in full of this most interesting monument of the piety of our ancestors, and of their devotion to the Immaculate Mother of God.

1. Direct me how to praise thee
Though I am not a master of poetry,
O thou of the angelic countenance, without fault,
Thou hast given the milk of thy breast to save me.

3. I am a sinner, full of faults,
I beseech of thee and pray thee do it,
O Woman Physician of the miserable diseases,
Behold the many ulcers of my soul.

4. O Temple of the Three Persons,
Father, Son and Holy Spirit,
I invoke thee to come to visit me
At the hour of my judgment and my death.

5. O Queen to whom it has been granted by the King,
The Eternal Father, out of the abundance of His love,
An inheritance to be the Mother,
I implore thy assistance to save me.

6. O vessel who carried the Lamp
More luminous than the sun,
Draw me under thy shelter into the harbour
Out of the transitory ship of the world.

7. O Flower of beauty, O Mother of Christ,
O Lover of peace and mildness,
I pray thee to hear me; may it ne'er occur to me
In any trial to forsake thee.

8. O Queen who refusest not any person,
Who is pure in his deeds, morals, actions,
I beseech Thee Christ to put me
(From the wily demons) amidst the saints.

9. O Queen of the Saints, of the virgins, of the angels,
O honeycomb of eternal life,
All surpassing power, presumptuous valour
Go not far without thee.

10. I am under thy shelter amidst the brave
O protecting shield, without being injured by their blows,
O Holy Mary, if thou wilt hear thy supplicant,
I put myself under the shelter of thy shield.

11. When falling in the slippery path
Thou art my smooth supporting hand staff;
O Virgin from the Southern clime,
May I go to Heaven to visit thee.

12. There is no hound in fleetness or in chase,
North wind or rapid river,
As quick as the Mother of Christ to the bed of death
To those who are entitled to her kindly protection.

13. O heart without sin, O bosom without guile,
O Virgin Woman who hast chosen sanctity,
In thee I place my hope of salvation
From the eternal torture of the pain.

14. O Mary, gentle, beautiful,
O meekness mild and modest,
I am not tired of invoking thee,
Thou art my guarding staff in danger.

15. Turn thine eyes, O Woman Friend,
Upon the distressed nobles of Erin;
To them restore the happiness of their lives
And obtain from them from the Eternal Father:

16. That every sinner of their numbers
Who has fallen into sin and is in need of succour,
Thou mayst redeem, O Virgin Lady,
They are in misery until you do it.

17. To the true Faith without dissimulation
May the Kings of the world be obedient,
Through the invocation of Mary, which is not weak,
And may they renounce the false religion.

18. To those who are in the pit of pain, in fire,
Whose portion is suffering,
Deign thy relief, O Mary,
And Amen say, O cleric. [1]

19. Every woman sick in childbirth,
If she has this, or that it be read for her,
She will get relief by the grace of God,
And of Mary Mother of the only Son.

20. Going to a sea voyage,
Or going to a single-handed combat,
Whosoever of the two hath justice on his side
Shall return alive without danger.

21. Every person who recites it from memory,
And hears it with due reverence,
And with sweet devotion to Mary,
Shall get relief and protection.

22. When you are rising in the morning,
And when going into bed do it [recite it],
And you shall have Mary as your friend
To redress all your grievances [wants].

23. A house is seldom burned
Which is under protection of the shield
Of the Virgin Mary,
If appropriate reverence be given to her.

24. Many are the countless virtues
Of the protecting shield corselet of Mary,
If we be in the state of grace,
And pray to her at all times with devotion.

[1] The following extract will serve to explain this stanza :

Email ThisBlogThis!Share to TwitterShare to FacebookShare to Pinterest
Labels: Prayers, The Mother of God

Thank you for this Marcella. Although we have our dogmatic differences, we still both love very much the Irish saints. And I think this is something very beautifull.

Well, I try to concentrate here on the Irish saints rather than on deep dogmatic questions which I am not competent to address. I comment on the historical background to this material but don't go out of my way to offend others. You may not know but I was myself in the Orthodox church for ten years and so have some understanding of Orthodox viewpoints and sensitivities. I am genuinely pleased if any Orthodox person wants to read my blog and you are most welcome here.

Thank you very much Marcella. God bless you. May Saint Brigid give you strength to continue your great work here.