Saint John the Apostle and the Early Irish Church

The Martyrology of Oengus devotes its entire entry for December 27 to two of the apostles - Saint John and Saint James. It reads:

27. The sound sleep of John in Ephesus
splendid the bordgal (?)
-with the ordination of James his brother, who is highest.

27. a splendid bordgal, i.e. John's valour (gal) was in Ephesus a splendid valour, i.e. a valour that went out over the border (bord) quasi dixisset Ephesus was full de operibus eius. his brother is highest, i.e. the greater is sollemnitas etc. 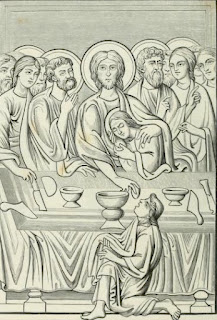 I haven't read any specialist commentary on this entry but would imagine that this word bordgal was an archaism which the later scholiast did not himself understand and sought to explain. I'm not sure he succeeded either!

There is a body of material concerning the beloved disciple preserved in the Irish sources. In an earlier post on the Irish tradition of the Antichrist, I had mentioned an Apocalypse of Saint John as one of its sources. In the article by Father Martin McNamara that I looked at then, he mentions that the Liber Flavus Fergusiorum preserves a composite Irish text containing episodes from the Beatha Eoin Bruinne, the Life of John the Beloved Disciple (literally John of the Breast), plus fragments of what seems to be an Apocalypse of John. Saint John received this epithet because he reclined on the the breast of Christ at the Last Supper (Jn. 13:25). This composite text was translated from Latin into Irish by an Augustinian friar, Uighisdin Mac Raighin, who died in 1405. It has been translated into English in a volume of texts edited by Father McNamara and Dr. Maire Herbert and so below are some extracts from the Apocalypse and Death of John to mark the feast of the Beloved Disciple, still commemorated on December 27 in the West, although the East celebrates this feast on September 26:

10. Thereafter John said to his disciples: "go and make a burial-place for me in front of the altar. Cast out the earth far away from it, and make it very deep". This was done, and he himself went into it and lay readily down on the ground, and stretched up his two hands towards the Creator, saying:

11. "I thank you, O Creator,
Christ, the mighty Lord,
great Heavenly Father,
gentle soft-spokem brother,
excellent noble teacher,
who gently and lovingly
calls me to your banquet,
who well understands
that I desire to go
to be with you in your kingdom.
You perceive, O divine kinsman,
how my heart has loved
your truth and your word,
loved to contemplate
and look on you totally,
I give you thanks."

15. Now I entrust and hand over your people believing in Christ, who have obtained wisdom, true knowledge and sagacity, and have been blessed and baptized. Take me to you, as you promised me in the company of my brethren, Paul, Peter, Matthew, and Thomas, and the other apostles, so that I may partake of the great feast which you have created from the beginning, and which has no end. Open the divine gates and beautifully-draped windows, and the path which is undarkened by the devil, without opposition, without hostile onset. Send your splendid angelic messenger to cherish and protect [me], for you are the almighty Christ, Father, Son and Holy Spirit, who lives and flourishes for all eternity". And all the people answered: "Amen".

16. Then a great brightness came upon the people for the space of one hour of the day. Such was the extent of the illumination that it could not be looked on. Everyone threw themselves on the ground. Then there came to them a beautiful fragrance, and perfume of angelic incense.

17. Thereafter they raised their heads, and looked at the burial-place. They found nothing there in place of the valiant priest, the eloquent judge, the devout helper, the wise preacher, the splendid confessor, the merciful dispenser of forgiveness, red-cheeked and blue-eyed, namely, John, the beloved apostle.. And thus John parted from the final things of this world.

18. The suffering and afflicted of the nearby district gathered to that place, and they were cured of all their ills.

19. As for the body of John, it is in a beautiful golden tomb, and at the end of each year, the best youth, who is without defilement or sin, is chosen, and he goes to cut John's hair and pare his nails, and when he has completed that task, he partakes of the body and sacrifice of Christ, and he himself ascends to heaven on that day.

Thus John's body remains without putrefaction or corruption. Indeed, it is as if he were in a deep sleep, and it will be thus until Doomsday.