The Sermo Synodalis from the Leabhar Breac

One of the sources mentioned in yesterday's list of Early and Medieval Latin Literature of the Irish Church was a text known as the Sermo Synodalis. A translation was published as part of a critique on the views of a Protestant Bishop on the nature of the 'Celtic Church' which appeared in the Irish Ecclesiastical Record of 1868 . Although the Leabhar Breac, the 'Speckled Book',  dates to the early 15th-century, it contains material sourced from earlier centuries. I do not, however, know when this particular piece dates from. The sermon is an exhortation to priests to uphold the very highest standards in the exercise of their ministry. It presents a number of challenges to contemporary thinking, for example, the sermon makes it clear that women are not to approach the altar or handle the chalice. Indeed, the notion of laypeople in general acting as 'extraordinary eucharistic ministers' to the sick is also dismissed. I would be interested to know more about this text, particularly its date, its historical context and to what extent the various vices and malpractices spoken against reflect the contemporary reality. If priests are being warned against drinking in taverns and hunting, does this imply that enough of the clery of the time were into these worldly pursuits for it to be a problem? And if they are being told to arise for Nocturns and vest appropriately for the Liturgy, does this suggest that these practices were not being observed as a rule? It would be good to know more of the background to this sermon to answer these and other questions. Finally, I have extracted only the English translation, the original volume has the Latin text printed alongside in parallel columns. 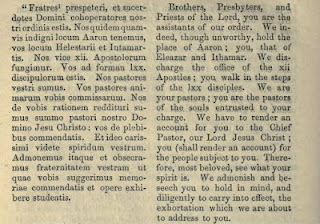 "In the Leabhar Breac there is a very ancient fragment entitled Sermo Synodalis, i.e. a discourse which a bishop should address to his clergy, when assembled in synod. It is given in that venerable repositary of the remains of our early Church at fol.124. p.2. and as it has never been published, we are happy to insert it in full in our pages :

Brothers, Presbyters, and Priests of the Lord, you are the assistants of our order. We indeed, though unworthy, hold the place of Aaron; you, that of Eleazar and Ithamar. We discharge the office of the XII Apostles; you walk in the steps of the Lxx disciples. We are your pastors; you are the pastors of the souls entrusted to your charge. We have to render an account for you to the Chief Pastor, our Lord Jesus Christ; you (shall render an account) for the people subject to you. Therefore, most beloved, see what your spirit is. We admonish and beseech you to hold in mind, and diligently to carry into effect, the exhortation which we are about to address to you.

In the first place we exhort you to be irreprehensible in your life and demeanour: that is, let your residence be near the church, and let no woman be in your house. Each night arise for nocturns: chaunt the liturgy at stated hours: devoutly perform the celebration of Mass: receive with fear and awe the Body and Blood of our Lord: purify and cleanse the sacred vessels with your own hands.

Let no one chaunt the Mass, unless he be fasting: let no one chaunt it without communicating: let no one chaunt it without amict, stole, alb, maniple, and chasuble. Let the vestments moreover be clean and not used for other purposes: let no one presume to chaunt Mass in an alb which he employs as his daily dress: let no one attempt to chaunt mass with a wooden or glass chalice. Let no woman approach the altar of the Lord, nor touch the chalice of the Lord. Let the altar be covered with clean linens: on the altar let nothing be placed except the capsea and relics, or perhaps the Four Gospels, or the pixis with the Body of the Lord for the communion of the sick: all other things should be set aside in a clean place. Let each one have a plenary Missal, a Lectionary, and an Antiphonary: let a place be arranged near the sanctuary or adjoining the altar, where the water may be poured which is used in washing the sacred vessels, and where a clean vase with water may be suspended, and there let the priest wash his hands after the communion. Let the church be roofed and vaulted, and let the porch be protected with a fence.

Let no one chaunt Mass outside the church, in private houses, in occult places. Let no one chaunt Mass alone. Let each priest have a cleric or scholar, to read the epistle and lesson, to answer at Mass, and with whom he may sing the psalms. Visit the sick and absolve them, and in accordance with the apostle's words anoint them with holy oil, and give them the communion with your own hand, and let no one presume to give the communion to a layman or to a woman to bear it to the sick. Let no one require a reward or gift for baptism of infants, or absolution of the sick, or burial of the dead. Be attentive lest through your negligence any infant should depart this life without baptism. Let no one be guilty of ebriety or litigiousness, for it is not becoming in a servant of God to be litigious: let no one bear in his dress gems for ornament, for yours should be the spiritual gems: let no one devote himself to sports of dogs or birds: do not drink in taverns: let each one of you according to his ability instruct his flock from the Gospel or Epistle on Sundays and festival days.

Although those who have been ordained to minister at the most holy altar should guard themselves against every sin, yet should they be particularly watchful to preserve their chastity, and to banish with all solicitude whatever could lead them to uncleanness. For he brings down the anger of God upon himself, whosoever presumes with an unclean conscience and impure body to approach that altar. Oh! How dreadful it is to touch the Lord with sinful hands".