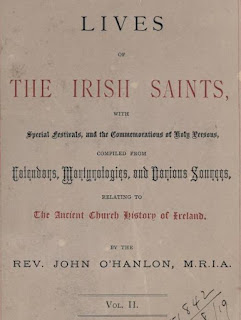 The Irish calendars commemorate a Saint Fintan given the title 'Corach' at February 21. Canon O'Hanlon says that this word has a variety of meanings depending on context, it may mean the "volatile," the "giver of a promise," or the "melodious." The entry in the Martyrology of Oengus reads:

21. Finntan Corach i.e. on his pilgrimage he went into Connaught, and they took pledges from him to come again, alive or dead. And in Lemchoill in Tir lia nDuach and Laigis is Finntan Corach: or in Cluain Aitchen in Laigis, or in Brenainn's Clonfert he is. i.e. Coir 'choruses' are sung at his grave, and not praise. Corach, i.e. a pledge whether alive or dead to come back again. Or the shrine wherein were his relics made turns of it (?). Or 'tis he that made adjustments (cora) in the order of the new rite, ut Sancti etc.
Vel quod uerius, in Cluain eidnech are the four Finntans. Finntan Corach, Senach the rough, friendly Colman son of Comgall, a trio of them with valorous warfare, one after the other in the abbacy.

"Fifteen years and six score (was) the age of Finntan, a-chanting lasting melodious psalms over the brink of a fountain."

The Martyrology of Tallaght, at this date, has the entry:

The Martyrology of Donegal records:

Although ruling over many churches and monasteries, according to our native Martyrologists, this saint has not been distinguished, in any biographies or Acts, whereby some doubts regarding him could more easily be dissipated. Colgan has an unsatisfactory account, at the 21st of February [where] it is said, that he presided over Leamchuill church, within the boundaries of Kilkenny County. Fintan was either buried, or venerated, at this place, as some of our Martyrologists relate. We next find it mentioned, that he presided over Clonenagh Monastery; yet, it is difficult to reconcile this statement with subsequent accounts regarding him. It has been asserted, that our saint flourished, towards the close of the sixth century. However, as this holy man cannot be confounded with Fintan Maeldubh, who, being successor to the great St. Fintan, died in the year 625, nor with that other St. Fintan Munnu, who again succeeded, and who died in 634. Dr. Lanigan suggests, that a chronological difficulty might be avoided, by supposing our saint to have been a simple monk, living at Clonenagh.

Some authorities state, that he either founded or governed a church at Cluain-aithchen, or Clonkeen, in Leix. A very probable conjecture has been hazarded, that this latter place may have been mistaken for Clonenagh ; and, if such be the case, a difficulty which arises by placing him at Clonenagh, might disappear. Colgan gives us to understand, that having abandoned Ciuain-aithchin, according to a promise made, he returned to Clonenagh Monastery, or, at least, that he was buried, at this latter place. It is said, that our saint discharged the double office of Abbot and Bishop, over the monastery and see of Clonfert. Our Fintan became bishop, it has been supposed, after the death of Moenninnius. Nevertheless, Dr. Lanigan does not assert, that our saint was his immediate successor. According to the same authority, he followed St. Brendan, as Abbot ; and, our saint was afterwards succeeded at Clonfert, by the Abbots, Colman, the son of Comgall, and by Senach Garbh.

It is said, that St. Fintan acquired the surname, Corach, either on account of his continual charge of place and residence ; or, because of a promise, given to his brethren, that he should return to Clonenagh or, perhaps, because of his melodious voice, by which he was distinguished for exactitude and devotion, whereby he performed sacred chaunts in celebrating Divine praises. It is said, our saint also introduced, among his monks, a new style for singing psalms and sacred canticles...

The exact date of his death is not known ; but, it is a conjecture of Colgan, that he flourished, about the end of the sixth century. Our Martyrologists place his festival, at the 21st of February; thus, St. Oengus the Culdee in his "Feilire," the Martyrology of Tallagh, the Martyrology of Donegal, Duald Mac Firbis, enter Fintann Corach. In the ancient Martyrology of the Cathedral Church of the Holy Trinity, Dublin, the festival of St. Fintan, Confessor, occurs, at the ix. of the Kalends of March— 21st of February—although it is not in the prefixed Calendar. Even, in Scotland, he was reverenced. Thus, at the ix. of the March Kalends— which is the 21st of February—the Kalendar of Drummond relates, that the Natalis of St. Fintan was celebrated on this day, in Ireland. A considerable share of doubt appears to have existed among writers, respecting the place of his death and sepulture. Leamchuill, now Loughill, or Lowhill, Cluain-aithchin, Clonenagh and Clonfert or Clonfert Brendain are severally named by our Martyrologists, in connection with the anouncement of his festival, or of his departure, or of the place where his remains had been deposited. It may be supposed that our saint died towards the close of the sixth, or during some earlier part of the seventh, century: his immediate successor, in the Monastery of Clonfert, having departed this life in the year 620.