On February 6 the Irish calendars commemorate a saint with close links to Saint Brigid, Bishop Mel of Ardagh. He is also linked to Saint Patrick, with a number of sources claiming that he is the nephew of the apostle to the Irish, being the son of his sister Dareca. This woman was reputedly a mother to no less than seventeen early Irish bishops and saints, which has led some scholars to speculate that she may have been a mother in the spiritual, rather than the biological, sense. Saint Mel figures most prominently in the Life of Saint Brigid by being the bishop who conferred the veil of the religious life upon her.  We can turn now to Volume 2 of Canon O'Hanlon's Lives of the Irish Saints for an account of Saint Mel's life:


THE festival, commemorated by the Irish Church, on this day, recalls to our minds, that gratitude we owe to our early Christian missionaries, who helped to gather and labour, in the same field of noble enterprise with St. Patrick... This renowned saint is classed among the primitive fathers of our Irish Church. He was a contemporary, and, it has been asserted, a near relative to the great Apostle, St. Patrick. At the very dawn of Christianity in our island, an illustrious champion and preacher of the Gospel had been already prepared, for a strenuous encounter, with the spirit of darkness. He is named Mel or Melus, in old Latin acts; and, this title was typical of those honied stores of Divine wisdom and of saintly qualities, which had been hived within his breast. A special Life of this holy man is not known to exist. From various ancient Acts of St. Patrick, and of St. Brigid, as also from other sources, Colgan has compiled a Life of St. Mel, and he has admirably annotated it. In like manner, the Bollandists have inserted Acts of Saints Mel, Melchuo, Mune, and Rioc, Bishops, at the 6th day of February. From these authorities shall we chiefly draw succeeding materials, to render intelligible the recorded actions of the holy Bishop Mel, the special patron of Ardagh diocese.

He seems to have been born, in the earlier part of the fifth century. It is said, Saint Mel or Melus was a nephew to the great Irish Apostle Patrick, and whose sister Darerca is named as Mel's mother.

St. Mel built a famous monastery at Ardagh. At this place, also, it is recorded, he exercised the jurisdiction both of abbot and of bishop. Among other celestial endowments, our saint received the gift of prophecy, whereby he was enabled to predict future events. This was exemplified in St. Brigid's case, and soon after he had arrived in Ireland from Britain. He foretold the greatness and sanctity of that holy virgin, while yet carried in her mother's womb. Some time subsequent to St. Brigid's birth, St. Mel administered to her the Sacrament of Confirmation. In conjunction, probably, with his disciple St. Machaille, Mel likewise bestowed the religious veil on that youthful spouse of Christ. Afterwards, the greatest friendship existed between our saint and the future abbess, as recorded in St. Brigid's Life.

St. Brigid seems often to have visited St. Mel, when she resided not far from Ardagh. At one time, the king of that district entertained both these holy personages ; and,- a remarkable miracle was wrought by the illustrious abbess, at a banquet, given in their honour. The kindness of St. Mel, interceding with the king for a supposed transgressor, on this occasion, pleasingly illustrates the holy bishop's character. St. Mel and St. Moelchu—both being regarded as distinct—are stated to have accompanied the abbess, to a synod, which was held at Tailten, in Meath.

It is said, that St. Mel wrote the Acts, virtues and miracles of his uncle, St. Patrick, while this latter holy man had been living for, the great Apostle of Ireland is supposed to have survived our saint five years. For his death, a.d. 466 has been assigned. Mel departed this life, at Ardagh, however, about the year 487 or 488. St. Oengus the Culdee, the Martyrology of Tallagh, Marianus O'Gorman, Cathal Maguire, and the Martyrology of Salisbury, record this holy bishop's festival, at the present date. It was probably that of his death, which is usually assigned to the 6th of February, and according to accounts left by our Irish hagiographers. This corresponds with the 8th of the February Ides.

Notwithstanding the celebrity of this saint, Mel, Epis.—meaning bishop— is the only entry, in the Martyrology of Tallagh, concerning him. Besides this, we read, in the Martyrology of Donegal, as having a festival on this day, Mel, Bishop of Ard-achadh, in Tethbha. He was a disciple of Patrick, according to the same authority ; but, nothing has been noted, about his relationship. Mel is regarded, as the first bishop over the see of Ardagh, and, he has been constantly venerated as the special patron saint of that diocese.

The Martyrology of Donegal entry reads:

MEL, Bishop, of Ard-achadh in Tethbha, disciple of Patrick, A.D.
487. Darerca, sister of Patrick, was his mother.

and the Annals of the Four Masters records his death thus:

The Age of Christ 487. The ninth year of Lugaidh. Mel, Bishop of Bishop of Ard-achadh, in Teathbha, disciple of Patrick died.

The picture below shows a painted scene of Saint Mel and Saint Brigid preaching to the people of Ardagh. It is from Saint Brigid's church in Ardagh, County Longford. 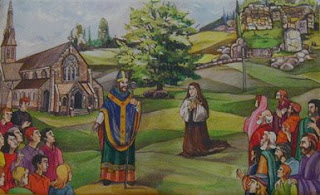