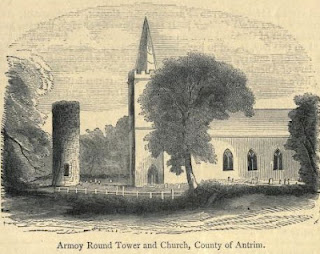 We have another saint known to us from Patrician hagiography commemorated on February 20, Olcan, Bishop of Armoy in County Antrim. The Irish word olc means bad or evil, as in the concluding line of the Pater Noster ach saor sinn o olc, 'but deliver us from evil'. The hagiographers thus made an attempt to explain our saint's unusual name and the extraordinary story of his birth is only one of the strange stories associated with Saint Olcan. The account below has been taken from the writing of the Archbishop of Tuam, Dr John Healy.

From Magh Elne Patrick crossed the river Bush, and came into the ancient and famous territory of Dalriada, afterwards known as the Route...

The first incident recorded in connection with the Saint's missionary journey into Dalriada is of a very striking character. The following is the narrative as given in the Rolls Tripartite :—

Then Patrick went (from the Bann) into Dal-Araide, and him Doro, King of Carn Setnai, in the North. He heard the crying of the infant out of the earth. The carn is broken up, the grave is opened. A smell of wine comes round them out of the grave. They see the live son with the dead mother, a woman who had died of ague. She was taken by them oversea to Ireland, and after her death brought forth the infant, who lived, they say,- seven days in the carn. "Olc (bad) is that," said the King (Doro). "Let Olcan be his name," said the Druid. Patrick baptised him. He is Bishop Olcan, of Patrick's household in Airthir Maige, a noble city of the Dal Riatai.

Such is Dr. Stokes' version of this important passage; and it appears to us to be an accurate rendering of his Irish text. Colgan's Latin version of the Tripartite is substantially the same except in two points. He makes St. Patrick baptise the infant; and the odour exhaling from the open tomb he describes as a 'sweet' odour instead of an odour of wine. As he knew the Irish idiom perfectly from the days of his childhood in Inishowen, we may fairly assume that he has rendered the Irish expression accurately in his own figurative language....

...Another interesting question is— When did Olcan become Bishop of Armoy? Patrick baptised him—that we know for certain, and we may safely say he did so about the year 443, when he first came into Dalriada. We are also told that Olcan belonged to Patrick's household; so we may fairly assume that he was educated by the Saint, and prepared for his episcopal duties under his guidance. Usher thinks he was not consecrated Bishop until some thirty years later, about 474, when Patrick himself had been long established in Armagh; and perhaps this is the safest opinion. But the Tripartite speaks of his baptism and episcopacy in the same context, as if he became bishop very shortly after his baptism. In certain cases, as, for instance, St. Fiacc's, such was the fact; but we can hardly assume it as probable in the case of St. Olcan. Our opinion is he became Bishop before St. Patrick finally left Dalaradia.

By anticipation, no doubt, another singular fact is related regarding Olcan. Saran was, as we have seen. Prince of Dalaradia when St. Patrick crossed the Bann. He was very justly excommunicated by Patrick, not only because he refused him the site of a church, but also because he drove him and his followers with contumely out of his territory. In that state of excommunication Saran must have lived for several years.

But, 'after a certain time,' this very Saran made a raid into Dalriada, and carried off many captives from that territory. Bishop Olcan met him carrying off his prey. The wretched captives, bewailing their hard fate, besought the bishop to help them. He implored the fierce chief to liberate them; but Saran rudely refused, except on condition that Bishop Olcan would procure him ' admission to heaven, from which Patrick had excluded him.' " Verily," said Olcan, " I cannot do that since Patrick hath taken it from thee." Then said Saran, " I will slay not alone these captives but all your people, sparing only yourself. And wherever I find a shaveling —that is, a tonsured man— I will put him under the edge of the sword.''

Saran was a decided anti-clerical of the worst type, so thereupon, the affrighted bishop ' promised heaven to Saran,' or, in other words, released him from Patrick's terrible excommunication, and, no doubt, got off his own followers, as well as the captives, scot free from the vengeance of the fierce warrior.

Now, Patrick soon after heard all this, and when Olcan went from the North—doubtless to Armagh—to do his will, that is at Patrick's command, Patrick happened to meet him on the road, at a place called Cluain Fiacnae. Olcan was sore afraid at this rencontre, for he had heard that Patrick was wrathful against him, 'because he promised a blessing and baptism, and heaven to the man from whom Patrick had taken them away.' It seems the road was narrow, and that Olcan threw himself on his knees to implore forgiveness. "Over him with the chariot," said Patrick. "I dare not drive over a bishop," said the charioteer. Then Patrick, still angry, foretold how Olcan's cloister would not be high on earth, and he added that three great evils would overtake it—poverty (midgla), decay, and blood-defilement. " Your land, too," said Patrick, " shall belong to that little boy carrying your vestment-box, who is one of your own household " — namely, Mac Nissi of Condere — 'and to one not yet born' —namely, Senan of Inis-altich...

St. Olcan's festival is celebrated on the 20th of February; and Colgan gives a sketch of his life at that date. He adds nothing, however, to what the Tripartite tells us, except the doubtful statement that St. Patrick sent him to study in Gaul, about the year 460; that he returned home after completing his studies, and opened a great school in his native territory, in which he trained up many disciples in sacred learning, the most celebrated of whom was St. Mac Nissi, the first Bishop of Connor. Usher thinks St. Olcan became Bishop of Armey in 474, which is not unlikely. A strange, but unsupported, statement is made in the Martyrology of Salisbury that Olcan's mother was a sister of St. Patrick. We are told, it is true, that she was a woman ' who came over the sea,' perhaps from Scotland, the nearest land to Dalriada; but no other ancient authority makes her a sister of our Apostle....