A saint associated with Saint Patrick is commemorated on July 14. Canon O'Hanlon rounds up the traditions and calendar entries concerning the feast of Saint Id (Idus) and the locality in which he flourished:

[Said to have lived in the Fifth Century.]

If what is generally accepted in relation to this holy man be correct, he must have flourished at a very early period in the Irish Church. The present saint, called Id or Idus, is said to have been one of St. Patrick's disciples, and to have been invoked in the old Irish metrical prayer, which bears the name of St. Moling. The reference to Colgan's Manuscripts is relied on for the foregoing statement. Unless the name can be resolved into Aed or Aedus, we do not find any such person in the published Acts of St. Patrick. The Martyrology of Donegal registers a festival to honour Id, Bishop of Ath Fhadhat, in Leinster, at the 14th of July. That place to which he belonged is said to be situated in the barony of Forth, and it gives name to the present parish of Aghade, in the county of Carlow. However, if the traditional accounts regarding it, as found in the romantic literature of ancient Erinn, be founded on anything approaching truth, the denomination of his place ought rather be called Ahade. There can hardly be a question, but that the original name of Ahade was Ath Fadat, or Fadat's Ford. There is a legendary Dindscanchas or nomenclature history of its situation, in the Book of Leinster, the substance of which is given by Professor Eugene O'Curry. [The story goes, that Etan Cend Derg or of the Red Head, with his household, fought Liath of Doire Leith, with his son Fadad and his two daughters Doe and Caichne, at Loch Lurcan, for the right of fishing in the Barrow. Liath was killed in this battle. Some time, afterwards, Fadad, the son of Liath, with his two sisters, Doe and Caichne, mustered their friends, and another battle was fought in the same place. There, on the banks of the Slaney, Fadad was killed. In commemoration of this event, the place was afterwards called Ath Fadad or the Fort of Fadad, a name which it retains to the present day, under the slightly Anglicized form of Ahade.]

The Protestant church of the union of Ballon and Aghade stands on the site of one much older, and the foundations have been utilized for the erection of the more modern building, which is said to have been so old, that the date and cost of its erection are unascertainable. The church is prettily situated, on a gently elevated ground, and in the midst of a highly cultivated district. A rivulet running close to the churchyard adds greatly to the beauty of this tranquil scene. Some interesting tombs and their inscriptions are to be found there. It has been stated, that about the middle of the twelfth century, by Dermod Mac Murchad, King of Leinster, a nunnery had been here founded, for nuns of the order of St. Augustine, but it was then attached to the nunnery of St. Mary de Hogges, in the city of Dublin. There is now no remembrance of the nunnery in this locality. A blessed well—but without a name—is there, while other antiquities exist, and numerous human remains have been turned up, between Ahade and the town of Tullow. 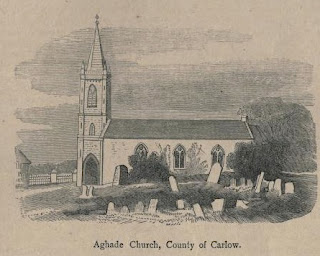 Under the head of Ath Fadat, Duald Mac Firbis enters the name Id, bishop of Ath-Fadat, in Leinster, for this day. At the 14th of July, St. Idus, Bishop of Ath-Fada, in Leinster, is set down by Rev. Alban Butler. In the "Circle of the Seasons," at this same date, he is simply called a bishop in Leinster. Little of a reliable character can be gleaned regarding him.