A saint from the beautiful lakeland county of Fermanagh is commemorated on March 29 - Ferghas, son of Enda, of Inis-Caoin on Lough Erne. Finding himself with little information about the saint, Canon O'Hanlon instead writes an enthusiastic account of the beauties of his locality:

Ferghas, son of Enda, of Inis-Caoin — now Iniskeen — in Loch Eirne, is set down, in the Martyrology of Donegal, as having a festival, at this date. The place, with which he was formerly connected, was on an island of moderate dimensions, and this was situated a few miles from the town of Enniskillen, on the beautiful Lough Erne. That glorious sheet of water, including the River Erne, of rare beauty and magnificence, has a wide and winding extent of sliore, in the counties of Cavan, Fermanagh and Donegal. From various surrounding hills and mountains, its panoramic splendours are exhibited to the gaze, and in every possible novelty of colour and grouping. Over two hundred islands break the water surfaces. The Erne flows in a north-west course, almost centrally through the county of Fermanagh. It is supplied with many tributary streams, along the forty miles of its tortuous channel; being divided into the upper and lower lake.

About midway on an island in the Erne, the elegantly-built and thriving town of Enniskillen stands, two handsome bridges, having five arches each, connecting this borough with the mainland. The romantic scenery both above and below this town is unrivalled. The upper lake has numerous indentations along its margin, on either side, and so thickly are its islands grouped, that at first sight it would seem a matter of extreme difficulty for a pilot, to find the proper channel. Its course gives the tourist a general idea of an inundated country. The islands are usually very fertile and verdant, while many are richly wooded. Projecting headlands on the river banks are often covered with fine timber, rising with stately trunks and branching tops, from the low and often marshy grounds. Herons and aquatic fowl breed along the rush-lined shores. Nothing can exceed the variety of landscape features here introduced. Swelling hills and more distant mountains frequently give a grand, and, an undulating, outline, to the prospect. The lower lake has a greater expansion of water, unimpeded by islands; although the latter are found to be not less numerous, while descending its stream. 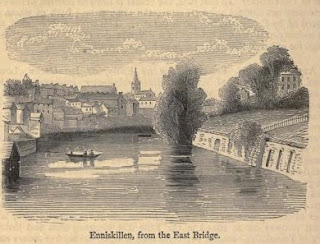 When St. Ferghas lived in Iniscaoin cannot be discovered; but, in the table, which is added to the Martyrology of Donegal, its compiler remarks, there is a parish church of St. Fergus of Iniscaoin, without cure of souls, because its rectory was secular or impropriate. The Bollandists barely allude to this holy man, as Fergussius, son of Ennius, of Inis-Caoin, in Lough Erne, and quote the Martyrology of Tallagh, as their authority yet, neither in the published work, nor in the Franciscan copy of that record, do I find any corresponding entry.