The Holy Daughters of Leinin, March 6

There are a number of interesting saints commemorated on March 6, but I have chosen to look at a group of holy women whose name lives on in the placename of Killiney, County Dublin. Canon O'Hanlon brings us the details, first of one group of five sisters and then of another sister called Brighit.

In the last chapter of the "Sanctilogium Genealogicum," these sisters are said to have been the daughters of Leninus, son to Garrchon, son to Donacius, the son of Conamalius, son to Colgan, son to Cronmael, son to Altius, son to Aengus, the son of Nuadatus, &c. In the Martyrology of Tallagh, these sisters are not named, at the 6th of March; but, there they are called, Ingena Lenini, or the "daughters of Leninus." Marianus O'Gorman, Charles Maguire and the Martyrology of Donegal place the festival of these holy ladies, at the 6th of March. The site for their church is determined, by Dr. O'Donovan, to have been comprised, within the greater part of the barony of Rathdown, in the present county of Dublin, or in some northern part of Wicklow County. There the sept of Ui-Briuin-Cualann was located. According to William M. Hennessy, the place where these pious ladies lived was in the southern part of the county of Killiney Church, County of Dublin. It is now said to be known as Killininy, or Kilnanaughnin, near Fir House Convent, Bohernabreena. There is an old ruined church at Killiney, on the sea-shore of Dublin County, and near the beautiful bay, to which the church gives name.... Whether it was at Killininy, or at Killiney, the pious daughters of Lenin lived, seems an uncertain matter ; but, it is probable enough, that while their sister Brighit remained at the latter place, the following five occupied the former as a residence. Thus, the Martyrology of Donegal enters the daughters of Leinin, as Druigen, Luigen, Luicell, Macha and Riomhtach. These are said to be sisters of Brighit, daughter of Leinin. Their place is called Cill-inghen-Leinin, in Ui-Briuin Cualann, in Leinster. All of those pious ladies, here venerated, were sisters to St. Colman the Bishop and Patron of Cloyne Diocese and, accordingly, they seem to have lived, towards the close of the sixth or the beginning of the seventh century. 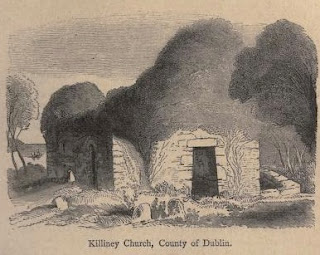