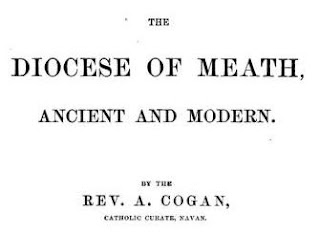 March 26 is the feast day of a 9th/10th-century County Meath saint, Mochta of Inis-Mochta. Canon O'Hanlon starts off by telling us that he is not to be confused with Saint Mochta of Louth, an earlier and much better-known figure whose feast is celebrated on August 19. I have followed up on one of O'Hanlon's references, to the work of diocesan historian Dean Anthony Cogan, who reproduced the references to Inis-Mochta from the Irish Annals. These give the impression that the island monastery must have been a foundation of some substance as both Viking and native invaders found it worth attacking. There is a particularly vivid description at the year 939 of the Vikings coming across the frozen lake to plunder the monastery on the ice. Our saint had already reposed by that time, as his death was noted some seventeen years earlier, but 'the miracles of God and the patron saint' are credited with preserving the island from being destroyed by fire in the year 1138. I will begin with the account of Saint Mochta by Canon O'Hanlon, taken from Volume III of his Lives of the Irish Saints and then proceed to the notes by Dean Cogan:

Different from another celebrated saint of this name, and connected with Louth, is the present holy man. The Bollandists have a notice of him. We find, on this day recorded, in the Martyrology of Donegal, the name Mochta of Inis-Mochta. This locality has been identified with Inishmouthy, county of Meath, by William M. Hennessy. It is also called Inishmot, now a parish, in the barony of Lower Slane. The ruins of Inis-Mochta church are still to be seen, on a romantic spot of ground, containing about two acres. A solitary wall only remains, at the present time; and, latterly, the graveyard has been neglected for interments. This locality was formerly an island. At present, the site is surrounded by low, marshy ground, which is frequently covered with water, during the winter season. The name of this place maybe rendered, in English, "the Island of Mochta." His festival was celebrated here, on the 26th of March. This saint appears to have flourished, in the early part of the tenth century. The death of Mochta of the Island, son to Cearnachan, priest of Armagh, is recorded at A.D. 922. There can hardly be a doubt, but that he is identical with the present saint.
--------------------------------------------------------------

Inishmot, or Inis-Mochta, i.e., the Island of St. Mochta. A religious house stood here, dedicated to St. Mochta, whose festival was celebrated on the 26th of March. The Four Masters have the following notices of this place:


"922. Mochta of the Island, son of Cearnachan, Priest of Armagh, died.


"939. Unusual frost, so that the rivers and lakes were passible; and the foreigners (Danes) plundered Inis-Mochta on the ice.

"1025. An army was led by Flavertach O'Neill, and Maelseachlainn, into Meath, and they obtained hostages, and entered Inis-Mochta upon the ice, and plundered the island, then in the possession of the foreigners (Danes).

"1138. Under this year the Four Masters describe a war between the O'Conors of Connaught, the O'Ruarks of Breffny, and the O'Carrols of Orgial, on the one side, and the Leinstermen, the Meathmen, and the Danes, on the other. After reporting some military evolutions the annalists proceed:

"After this the Meathmen, Leinstermen, and the foreigners, proceeded to Inis-Mochta to plunder it, and a countless number of them went on rafts, and by swimming, on the lake, to reach the island; and a party of them did reach the island. The people of the island afterwards came to them in vessels, and numbers of them (the aggressors) were drowned and slain by them; and the party who were on the island fled from thence, not having been able to burn the island, through the miracles of God and the patron saint."

"1150. A royal journey by Murtogh O'Loghlan, with the chieftans of the North of Ireland, to Inis-Mochta, to meet O'Carroll and O'Ruark. The hostages of Connaught were brought him to that place without a hosting, through the blessing of Patrick, the successor of Patrick, and his clergy. He divided Meath on this occasion into three parts, between O'Connor, O'Ruark, and O'Carroll; and they banished Murrogh O'Melaghlann from Meath, through the curse of the successor of Patrick and his clergy."

Dr. O’Donovan justly remarks: "The ruins of the church of Inis-Mochta are still to be seen on a spot of ground containing about two acres, which was formerly an island, and is now surrounded by low, marshy ground, which is always flooded in winter."