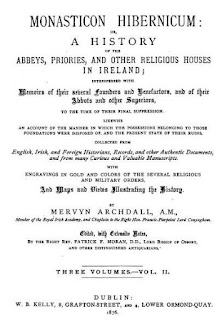 Although his feast is now celebrated on June 6 in Ireland, the Irish calendars record the commemoration of Saint Iarlaithe (Iarlath, Jarlath) of Tuam at December 26. The Martyrology of Donegal makes mention of his reputation for ascetic spiritual practices as well as for prophecy. The entry ends with an intriguing prediction that 'three heretical bishops' would be among his successors before Mael, 'the first powerful man' would make things right once again:

IARLAITHE, Bishop, of Tuaim-da-Ualann, in Connacht. He was of the race of Conmac, son of Fergus, son of Ross, son of Rudhraighe, from whom the Clanna-Rudhraighe are called; and Mongfinn, daughter of Ciordubhan, of the Cinel Cinnenn, was his mother. He used to perform three hundred genuflexions every night, and three hundred genuflexions every day, as Cuimin, of Coindeire, states. Thus he says :

It was Iarlaithe that predicted every bishop that would come after him at Tuaim. And he predicted that Mael would come after the three heretical bishops who were in his city, &c. This is the quatrain which speaks of the Mael, viz. :

"The Mael the first powerful man."

Below is an account of Tuam from the Moran edition of Archdall's Monasticon Hibernicum, which contains some interesting information on the rediscovery of the relics of Saint Iarlaithe in the seventeenth century:

St. Jarlath is said to have made it a cathedral in the beginning of the sixth century; and it is also said that a city was built here in honour of this exemplary bishop. His remains were preserved at Tuam, in a chapel called Temple-na-scrin, i.e. the church of the shrine. After the death of this saint, we meet with three persons who are expressly said to have been abbots of Tuam, viz.: Cellach, son of Eochad, who died in the year 808; Nuadat Hua Bolchain, abbot and anchorite, who died 3rd October, 877; and Cornac, son of Kieran, abbot of Tuam and prior of Clonfert, who died in 879.

The festival of St. Jarlathe, now kept on the 6th of June, is marked in our calendars on the 26th of December, on which day he is commemorated in the Martyrology of Donegal. He was born in the 5th century, and is said to have received in his childhood the blessing of St. Benignus, of Armagh. He established a religious house at Cluainfos. i.e., “the valley of retreat," about a mile from the present town of Tuam, and subsequently erected the church and monastery of Tuam. St. Jarlathe was remarkable for his austerities, and in the poem of St. Cuimin of Connor, on the characteristic virtues of the Irish saints, he is styled “one who practised not penury," and who made three hundred genuflections each day, and the same each night He died about the year 540. His relics were preserved in a rich shrine in a separate church, thence called Skreen, in the town of Tuam. Dr. John Lynch, writing in 1672, describes a portion of the old walls of this Skreen as still standing, though the place was then used as a barn. He adds that in the beginning of the century, while some men were engaged in threshing corn, they remarked something shining in the floor; removing the clay, they found a rich ornamental case enclosing the relics of St. Jarlathe — " Cupream thecam quinquangularem S. Hierathii Reliquias includentem:" this was brought to Dr. Daniel, the Protestant Archbishop, who privately handed it over to the Roman Catholic Vicar-General, Francis Kerevan, by whom it was consigned to a good Catholic family for safe keeping. Colgan speaks of these relics as still preserved in his time. During the episcopate of Aed O'Hoisin, the cathedral was built through the munificence of Turlogh O'Connor, Monarch of Ireland.