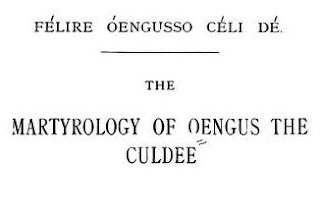 December 3 sees the commemoration of a saint associated with the monastery of Lismore, County Waterford. This important monastic school was founded by Saint Carthach (also known as Mochuda) and produced a number of notable saints and scholars. A diocesan historian gives this brief description of it:

The church and monastery of Lismore, which grew to be one of the renowned centres of ancient Irish learning and piety, owed its foundation to St. Mochuda of the 7th century. Mochuda, otherwise Carthage, was a native of Kerry, and he had been abbot of Rahan in Offaly. It is probable that there had been a Christian church at Lismore previous to the time of Mochuda, for in the Saint's Life there is an implied reference to such a foundation. Be this as it may, Mochuda, driven out of Rahan, with his muintir, or religious household, migrated southward, and, having crossed the Blackwater at Affane, established himself at Lismore in 630. In deference to Mochuda's place of birth the saint's successor in Lismore was, for centuries, a Kerryman. Lismore grew in time to be a great religious city, and a school of sacred sciences, to which pilgrims from all over Ireland and scholars from beyond the seas resorted. The rulers of the great establishment were all, or most of them, bishops, though they are more generally styled abbots by the Annalists. Among the number are several who are listed as Saints by the Irish Martyrologies, scil:


The Martyrology of Donegal for 3rd December simply commemorates 'MACCOIGE, Abbot, of Lis-mór-Mochuda', but there is a less prosaic entry in the metrical Martyrology of Oengus:

The scholiast goes on to record a rather extraordinary legend associated with this saint:


3. Macc óige, i.e. abbot of Less mór Mochutu, and he was called 'the Frightener or the Disturber,' and this is the cause: when he was a little child, the plough-teams of the world, and every other kind of cattle which used to serve human beings, when they used to see him, would flee before him in panic and terror. Hence was understood the great servitude to him in which they were all to be thereafter.

It would seem that Saint Mac-óige was a contemporary of the eighth-century Céile-Dé leader, Maelruain of Tallaght. In the collection of materials published under the title 'The Monastery of Tallaght', some of Mac-óige's own teaching is preserved:


76. This is what Mac Óige of Lismore said in reply to a certain man who inquired of him which attribute of the clerical character it would be best for him to acquire. He replied: ‘That attribute with which he has never yet heard fault found. If a man be distinguished [for charity],’ said he, ‘it is said that his charity is too great; if humble, it is said again that that man is too humble; if ascetic, that his abstinence is excessive, and so with the rest. I have never heard, however,’ said he, ‘of anyone of whom it was said that “this man is too steady”. Whatever task a man has set his hand to, it is best for him to persevere in it,’ etc.