A Septet of Irish Hagiologists 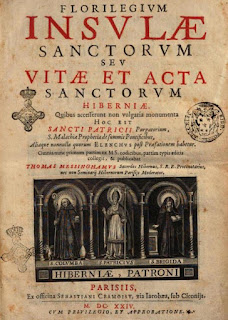 I have recently finished posting a series of biographies of Irish saints taken from a nineteenth-century encyclopaedia published in the United States. The same volume also contains potted biographies of some of the later hagiologists who collected and published the lives of this country's holy men and women. They were operating in a very different climate from the days when hagiography was produced in Irish monasteries, for they were working against the backdrop of the Reformation and from within the various Irish Colleges in continental Europe. I have selected the following seven, with an indication of the era in which they flourished:

There are some posts already on this blog on Friars Colgan and O'Clery which can be found under the tag 'seventeenth century'. My other site, named after Father Colgan's most famous work, the Trias Thaumaturga, contains a sample of Dr David Roth's work on Saint Brigid and can be read here. Dr Messingham's famous work, the Florilegium Insulae Sanctorum, can be read online at the Internet Archive here. Finally, there is an introductory article by scholar Colm Lennon on the life and times of Dr Richard Creagh here.

COLGAN, JOHN, a learned Irish divine and antiquarian, was a priest of the Order of St. Francis, and was educated on the Continent. He was a cotemporary of Ward and O'Clery, the learned antiquarians, and a member of the same order. He labored principally on the Continent, in the Monastery of St. Anthony of Padua, and also at Louvain, where he was professor of Theology. On the death of Dr. Ward, Colgan made use of the materials collected and in 1645 produced a folio volume at Louvain, containing Lives of the Irish Saints, whose feasts fall in January, February and March. It is entitled "Acta Sanctorum Veteris et Majoris Scotiae." He published a second volume in 1647, entitled "Triadis Thaumaturgae," containing lives of St. Patrick, St. Bridget and St. Columb. He also wrote a critical treatise on the Life and Writings of Dr. John Scot — Duns Scotus — his celebrated countryman, called "The Subtle Doctor," a man of universal knowledge and unrivalled penetration and powers of analysis. The last was published at Antwerp in 1655. He also left many valuable MSS. in his monastery at Louvain in reference to other Irish missioners and doctors who flourished on the Continent. He died about 1670.

CREAGH, RICHARD, a learned Irish divine scholar and confessor, was educated at Louvain, and was consecrated in Rome Archbishop of Armagh. He was the author of "Treatise on the Irish Language," "Ecclesiastical History," a controversal work, "Chronicle of Ireland, and Lives of Irish Saints,  etc., etc. He was at length arrested under the persecution of Elizabeth, and imprisoned in the Tower. He was offered his liberty, and a substantial reward if he would consecrate some of the reformed bishops, but he firmly refused, and at length died in the Tower,  from neglect and suffering, A. D. 1585.

MESSINGHAM, THOMAS, an Irish divine and writer, was born in the province of Leinster, Ireland, about 1575. He received his education principally in France. He was an Apostolic Prothonotary and Superior of a community of Irish ecclesiastics in Paris. He published in Latin a volume containing lives of many of the Irish saints. It was issued in Paris in 1624, and was entitled "Floreligium Insula Sanctorum."

O'CLERY BRO. MICHAEL, an eminent and learned antiquarian and historian, was a native of Ulster and a monk of the order of St. Francis. He was educated on the continent, and was a contemporary of Dr. Hugh Ward, who was his religious superior, and who sent him to Ireland from their monastery in Louvain to collect material for projected Irish histories and monuments of the past. On the death of Dr. Ward, O'Clery continued the labors, and produced an "Abridgment of the Lives of the Irish Kings," with their genealogies. Also lives of Irish saints called "Sanctilogium Genealogium," and also a history of the different inhabitants and conquests of the island, wars, and other remarkable events up to the twelfth century. This work is called "Leabhar Gabheltas." He was also the principal author of the "Annals of the Four Masters." His assistants were his brothers Conary and Peregrine O'Clery and Ferfessa O'Mulconry, or O'Conroy.

ROTH, DR. DAVID, an Irish divine and philosopher, and one of the most learned and eloquent men of his age, was born in County Kilkenny, Ireland, about 1570. He finished his education on the Continent and became Professor and Doctor of Theology in the College of Douay, and still later Bishop of Ossory. He was skilled in all the learning of the day, and according to Usher was unrivalled in the extent and profundity of his knowledge; a renowned orator, a subtile philosopher, a profound theologian and a learned historian; he wrote on all subjects, and contributed materially to the sum of human knowledge. He was the author of many works in Latin, and among them "Hibernia Resurgeras," which was printed at Rouen and Cologne in 1621, and also a work on the antiquities of Ireland.

WADDING, REV. LUKE, an able and learned Irish priest, was born October 16, 1588 at Waterford, and like most of the Irish ecclesiastics of those days received his education on the continent, principally in Spain and Portugal with the Jesuits, on account of the Penal Laws which made it felony at home. He held a professorship at Salamanca where he joined the Franciscan order and afterward resided in France and later in Rome, where he wrote with indefatigable industry, pursuing historical investigations. He was author of a History of the order of St. Francis and edited the Opera Speculativa of his renowned countryman Duns Scotus, which he published in 12 folio volumes, at Lyons in 1639. He was offered a Cardinal's hat, which he declined. He also edited Calasio's Concordance, besides producing many other important works. He died at Rome in 1657.

WARD, HUGH, an Irish divine, writer and antiquarian of the seventeenth century, was a native of Donegal and was educated at Salamanca, in Spain. In 1616 he joined the Order of St. Francis and was sent from Salamanca to Paris where he completed his ecclesiastical studies. He was afterwards Lecturer in Theology and Warden at Louvain, Netherlands. He wrote a number of works relating to Ireland, and planned writing an Universal History of Irish Saints, and sent one of his monks, Michael O'Clery to Ireland to collect materials for the purpose, but died before the project was well commenced.

Thank you so much for the time and effort you are putting into this blog. It's an everyday read for me and I am becoming convinced that the Irish did save civilization.

Thanks very much for your support. I have spent the last few weeks getting more posts ready so there is much more to come. Can't promise to publish every single day but will try my best!