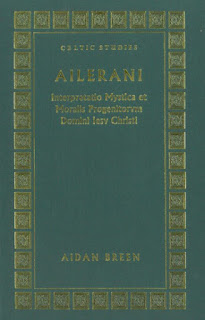 December 29 sees the commemoration of one of the great scholars of the monastic school of Clonard - Aileran  (also known as Aireran ) the Wise. The Martyrology of Oengus records:

29. Swift will be their aid:
at every hour may it shelter us!
Victor and a famous host,
with Aireran the sage.

to which the scholiast adds:

Archbishop John Healy gives an account of the life and works of Saint Aileran in his classic work on the monastic schools of Ireland:


The school of Clonard, too, for many centuries retained its ancient fame, and from time to time produced distinguished saints and scholars. St.Aileran the Wise, who, like many other Irish saints, died of the fatal yellow plague that devastated the country in A.D. 664, is described as chief professor of the schools of Clonard.

He was also, in Colgan's opinion, the author of what is known as the Fourth Life of St. Patrick, as well as of Lives of St. Brigid, and St. Fechin of Fore, in Westmeath. Moreover, he composed a Litany partly in Latin and partly in Irish, which O'Curry discovered in the Yellow Book of Lecain in Trinity College. Fleming, too, has published a fragment of a Latin treatise by St. Aileran on the "Mystical Interpretation of the Ancestry of our Lord Jesus Christ" This fragment was found in the Irish monastery of St. Gall in Switzerland. It was first published by Fleming in A.D. 1667, and reprinted in the famous Benedictine edition of the Fathers in A.D. 1677. It may, perhaps, with greater readiness be referred to in Mignes Patrology (vol. 80, page 328).

We make special reference to this fragment because we have no other writings of the Clonard school remaining, either of St. Finnian himself or of his immediate successors; and secondly because of itself it furnishes ample proof of the high culture attained at that early age in this great Irish seminary. The Benedictine editors say that although the writer did not belong to their order, they publish it because Aileran "unfolded the meaning of Sacred Scripture with so much learning and ingenuity that every student of the sacred volume, and especially preachers of the Divine Word, will regard the publication as most acceptable (acceptissima)."

This is high praise from perfectly impartial and competent judges, and in that opinion we cordially agree. We read over both fragments carefully, that mentioned above, and also a "Short Moral Explanation of the Sacred Names,' by the same author, and we have no hesitation in saying that whether we consider the style of the latinity, the learning, or the ingenuity of the writer, it is equally marvellous and equally honourable to the School of Clonard. The writer cites not only St. Jerome, St. Augustine, and the author of the "Imperfect Work," but what is more wonderful still, he quotes Origen repeatedly, as well as Philo, the Alexandrine Jew. We cannot undertake to say that he was familiar with these two authors in the original Greek, but even a knowledge of the Latin versions in that rude age is highly honourable to our Irish schools. This fragment shows, too, that a century after the death of the holy founder scriptural studies of the most profound character were still cultivated with eagerness and success in the great school of Clonard.

Note: An example of Saint Aileran's work, The Mystical Interpretation of the Ancestry of our Lord Jesus Christ can be found in a 2021 post here.