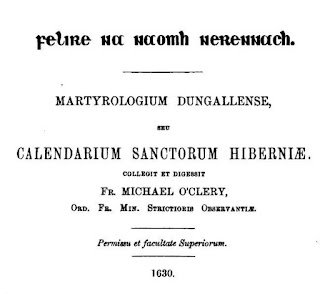 We have another of the many obscure Irish saints commemorated on December 27. In the case of Tiopraite of Magh-ratha, the locality associated with him brings its own problems of identification. The Martyrology of Donegal records:

whilst the earlier Martyrology of Gorman says, rather more poetically:

The index of places attached to the Martyrology lists a number of possible locations for Magh-ratha:

A nineteenth-century antiquarian made a case for identifying Magh-ratha with Moira, County Down, a locality said to have been the site of a famous eighth-century battle. He mentions our saint in passing:

It also appears by the Calendar of Donegal, December 27, that there was another church in Magh Rath, dedicated to St. Tiopraite, but nothing more of it is known...

J.W. Hanna, "The Battle of "Magh Rath:" Its True Site Determined", Ulster Journal of Archaeology, Vol. 4, (1856), 59.
But since the writer does not provide conclusive proof that Moira, County Down is the Magh Rath spoken of in the sources, it remains equally likely that the church of Saint Tiopraite was located at one of the other suggested sites. The website Place Names NI sums up the latest scholarly thinking on the derivation of this place name, which is not as straightforward as it might at first sight appear.
So, all we can say for sure is that the name of Saint Tiopraite is recorded on December 27 in two of the later Irish Martyrologies but when and where exactly he flourished remains open to question.

Magh Rath is in Ballybofey county Donegal. I can prove the Battle of Magh Rath happened here.

Magh Rath of the Red Pools is in ballybifey County Donegal