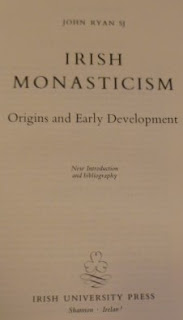 December 2 is the feast of a County Louth saint described in the Martyrology of Donegal as:

This would seem to associate him with the early Patrician saint Mochta of Louth and his monastery. Mochta, like Saint Patrick, was a Briton by birth and in the list of the 'Household of Saint Patrick' preserved in the Tripartite Life he is listed as 'his priest'.

Saint Mainchein is not the only saintly cook mentioned in the Irish calendars, last year I posted on another saint with a December feastday, Temnióc of Clonfert, cook to Molua and of course we have the more famous Saint Blath, cook to Saint Brigid of Kildare.

As I am currently rereading Father John Ryan's classic account of Irish monasticism, I noted his observation that the Latin term 'cellarius' - cellarer is used to translate the Irish ceallóir or coic, and it is this latter term which the Martyrology of Donegal uses to describe Saint Mainchen. Father Ryan describes the functions of this monastic office, which carries rather weightier responsibilities than the term 'cook' might suggest:

The cellarer (ceallóir or coic) had under his charge not only the kitchen, but the supplies upon which the kitchen depended. He had, therefore, to be a man in whom the fullest reliance could be placed. Over-generosity on his part might lead to unbecoming ease and laxity, whilst an all too rigorous regime might lead to murmuring, discouragement and discontent. Even Caesarius of Arles proved a failure when appointed to fill this office at Lérins, and had to be superseded by another. Hence much might be said in justification of a statement made in one of the later rules that the discipline of the community depends on the cellarer. [This statement is from the Rule of Ailbe, 32: 'as the food is, so will the order be'.]