All the Saints of Ireland - A Prayer

November 6 is the Feast of All the Saints of Ireland, this blog's patronal feast. To mark the occasion below is a prayer taken from a post first made on my former blog in 2009. May I thank everyone who reads and supports this site, Beannachtaí na Féile oraibh! 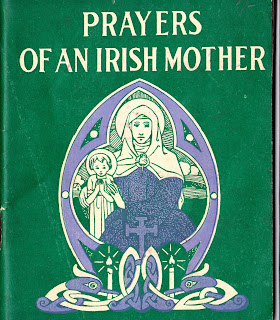 I was interested to see that in my 1934 edition of Prayers of an Irish Mother, a prayer for the feast of All the Saints of Ireland had already appeared. It is written in the late Victorian poetic style, and I was struck by how out of favour, not only the style, but also the sentiments, are in the Ireland of today. Modern prayers tend not to dwell on sorrows and black despair and the experience of every Irish family having its exiled ones is no longer quite so true. Prayers of an Irish Mother was compiled by Mary T. Dolan from the prayerbooks used by her own mother who died in 1929. It's thus a testimony to late nineteenth-century Irish Catholicism and contains an eclectic mix of continental devotions, for example, Saint Therese's Little Way, prayers from the Irish folk tradition in honour of our native saints and sentimental Victorian verse. I don't know where the verse in honour of All the Saints of Ireland originated as the individual sources are not spelt out. The book still remains in print today as a small pocket volume with a plain cover. As you can see from the picture, however, the 1934 edition boasts a splendid cover illustration by the publisher, Brian O'Higgins. O'Higgins was an Irish nationalist politician who operated his own publishing company and is known for his illustrations in this distinctive style. This is very much an Irish Madonna and Child. The Mother of God is wearing a wonderful Tara-style brooch to secure her mantle and behind the figures is a representation of the fields and cottages of Ireland in the distance. The candles make me suspect that this is one of O'Higgins's Christmas card illustrations as he produced a series of these. One gets a real glimpse of the prayer life of a nineteenth-century Irishwoman from this little volume. The author says of her mother: 'She devoted all her morning and evening hours to prayer, loving to croon prayers, when alone, in the fashion of our Irish people of a few generations ago.' It's a window, therefore, into a world that has all but vanished.

All the Saints of Ireland

Thank God for loyal friends of ours
Who guard us every day,
When joys depart, when sorrows come,
When hope seems far away.
When close to every path we walk
Are clouds of black despair,
Sure all the saints of Ireland,
A shining band are there.
They march with every faithful soul
In gladness and in woe,
They watch above our exiled ones
Where'er on earth they go;
O, when we tread the road of death
At ending of the day,
May all the Saints of Ireland
Be with us on the way!

Email ThisBlogThis!Share to TwitterShare to FacebookShare to Pinterest
Labels: Feast of All the Saints of Ireland