The Legend of Saint Catherine of Alexandria 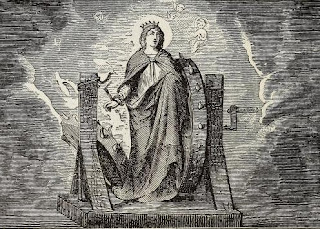 November 25 is the feast of Saint Catherine of Alexandria, one of the great eastern female martyrs. The story of Saint Catherine's martyrdom was immensely popular in the medieval west and includes a fifteenth-century Irish version. In 2014 I posted a translation of a medieval Irish poem in honour of Saint Catherine here, below is a later poetic offering by a nineteenth-century Irish woman, Ellen O'Connell Fitzsimmon. I hadn't heard of the author before but learnt here that she was actually a daughter of the Liberator himself, Daniel O'Connell. Our poetess tells us in the introduction to her work that she was inspired by a fresco in Saint Clement's Basilica in Rome to give her own version of Saint Catherine's martyrdom:

THE LEGEND OF ST. CATHERINE OF ALEXANDRIA.
By Ellen Fitzsimon (born O'Connell).

BENEATH Saint Clement's venerated dome,
Most perfect of the Basilics of Rome,
(Where a good Irish friar hath done more
Than all the rich and pious had before
In many centuries), there met my sight
A fresco painting, not long given to light,
The which a noble, simple story told
Of triumph by Saint Catherine won of old
Against the heathen sages, and the day
When for the Christian Faith she gave her life away.
Recalling this, and many a glorious feat
Of that great Saint, her legend I repeat.
Laying my homage humbly at her feet.