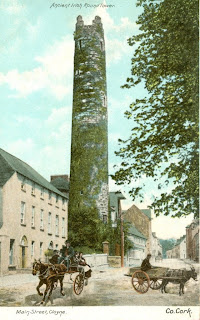 November 24 is the feastday of a Cork poet-saint, Colman of Cloyne. I have previously posted Archdall's account of the saint and his locality here. Below is another account of the life of Saint Colman and the locality of Cloyne, this time from Mary Frances Cusack, the 'Nun of Kenmare':

According to the Annals of the Four Masters, St. Colman died in the year 600 (i.e., 601 of our present computation), and the 24th of November is the day on which his festival is marked in all the ancient calendars, and on which it is still observed in the diocese of Cloyne. Our patron of Cloyne must not be confounded with another St. Colman, who was honoured on the same day. Both these saints are thus commemorated by St. Aengus, in his Felire, at the 24th of November:

"With Cianan of Daimliac,
A beautiful ear of our wheat,
Mac Lenine, the most excellent,
With Colman of Dubh-Chuillenn."

The Martyrology of Donegal preserves the following quatrain from the ancient poem Naomhsheanchus, on the Saints of Ireland:

"Colman, son of Lenin, the full.
And Mothemneag, son of Corban,
Were of the race of two brothers—
Oilioll Oluim, and Lughaidh."

The old Latin Life of St. Brendan passes the following eulogy on St. Colman:—"This Colman, the son of Lenin, was for learning and a holy life chief among the saints. He founded the church of Cloyne, which is at this day a cathedral, and famous throughout the province of Munster."

Cloyne was situated in the territory of Ui-Lethain, and in that sub-division which was called Ui-Mocaille, a name that is still retained in the barony of Imokilly. It is distant nineteen miles from Cork, and "is seated in the heart of a rich and highly cultivated country, being embosomed in gently rising hills. It does credit to the choice of the ancient fathers who here took up their abode in very remote times."— Brash, Journal of Kilkenny, Arch. Society. (New Series, ii. 253.)

To distinguish this See from other churches of the same name —of which there were several scattered throughout Ireland— it was sometimes called by the name Cluain-mor, i.e., "The Great Cloyne," but more generally Cluain-uamha, that is " Cloyne of the Caves." There are some very deep and interesting caves close by the old Cathedral. It is probable St Colman or some of his religious lived in them in olden times; and it is the popular tradition that many of the clergy and people found a safe retreat there when the country was engaged by the Danes…

…. Cloyne, according to an ancient MS., was the favourite place of burial for the " best bloods of Ireland," on account of the sanctity of the founder of the See. That it was so venerated we find from the will of Cormac Mac Cullenan, who desired to be buried here.

In the "Book of Rights," page 87, Cluain-uamha is mentioned as one of the royal residences of the kings of Cashel, and subsequently is added: —

"Of the rights of Cashel, in its power
Are Bruree, and the great Muilchead,
Seanchua the beautiful, Rosraeda the bright,
And to it belongs the noble fort of Cluain-uamha."