Saint Banbán the Wise, May 9 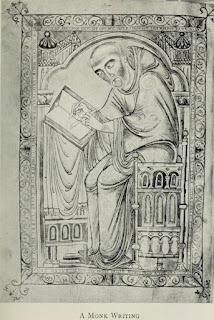 May 9 is the feast of Saint Banbán, whom the calendars dub 'the Wise' (Latin, sapiens). He is one of a number of saints who share this ancient name, as the online version of the nineteenth-century Cyclopedia of Biblical, Theological, and Ecclesiastical Literature edited by John McClintock and James Strong helpfully lists:

Banban
In Irish hagiology there are several Banbans given.
(1.) Two of these are probably the same person, Banban the Wise, attached to separate days, May 1 and 9. Colgan (Tr. Thaum. p. 176) is of the opinion that the Banbanum to whom St. Patrick committed the Domnach Mor, or large basilica in Magh-Sleacht, was Banban the Wise. He also supposes him to have been a son of Richella, sister of St. Patrick. In Tr. Thaum he is called presbyter, but at May 1 the Mart. Tallaght calls him bishop.
(2.) Bishop of Leithglinn, commemorated Nov. 26; the abbot of Claenadh (Clane, County Kildare), who died A.D. 777.
(3.) Another bishop, put by Mart. Doneg., etc., on Dec. 3.

Canon O'Hanlon rather adds to the confusion in the entry for Saint Banbán in the May volume of his Lives of the Irish Saints. For he seeks to equate him with a scribe of Kildare and insists that he is also known as Colmán:

Article III. St. Colman, Banban, the Wise, Supposed to have been Scribe of Kildare.
[Seventh and Eighth Centuries.]
By Colgan, the holy Colman is identified with a Banban, or a Banan, venerated at the 1st of this month. There, his pedigree has been given, and as has been stated, he belonged to the Nan-Decies race. However, this does not seem to be very certain. Referring to the Martyrology of Tallagh, and to other Irish Martyrologies, the Bollandists commemorate Banbhanus or Banuanus Sapiens, at this day. He is thought, by Colgan, to have been a relation of St. Patrick, and to have been that faithful prophet alluded to in the Acts of the great Irish Apostle. In the Martyrologies of Tallagh and of Donegal, his name is simply entered as Banban, "the sage," or "the wise." It is probable, this was the name by which he was best distinguished; but, he appears to have been known as Colman, likewise, and as there were many saints so denominated in our calendars, his skill as a scribe may have determined the additional appellative. He died, on the 9th of May, A.D. 720 if, as seems probable, he was the St. Colman Banban, scribe of Cill-dara. The Annals of Ulster and Archdall place his death at 724.

So, as we can see, there are differing traditions surrounding the figure of Saint Banbán, the Wise. Pádraig Ó Riain in his authoritative 2011 Dictionary of Irish Saints feels that it is telling that today's May 9 feast is the octave day of May 1 and that both days commemorate the same individual. He also feels that the Saint Banbán, Bishop of Leighlin, commemorated on November 26, is a further feast of the same holy man.