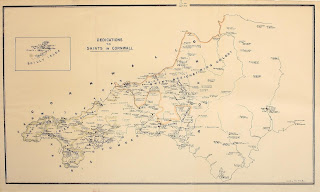 May 29 is the feast of the County Offally female Saint Brunsecha of Killyon, whose story is interwoven with that of Saint Ciarán of Saighir and his mother, Saint Liadhain. Today we are going to reprise Saint Brunsecha's story but this time in connection with a Cornish saint, Buryan (Burian, Buriana, Buriena) who seems to have assimilated aspects of our Irish holy woman's identity, including her feast day. As we shall see though, May 29 is only one of a number of different feast days ascribed to the Cornish saint in the sources. In general I am sceptical about the Irish origins claimed for saints such as Buryan, since Ireland in the Middle Ages was regarded as the insula sanctorum there was a certain cachet associated with claiming an Irish saint as a monastic or church founder. That is not to deny of course that there are Irish saints whose well-documented careers in Britain are beyond question, but the vague claims surrounding 'Irish princesses' such as Buryan cannot readily be substantiated. But let us start by looking at what these claims were. Canon O'Hanlon's Lives of the Irish Saints has an entry for Saint Buriena on this day, but our guide below is the prolific Anglican writer Sabine Baring-Gould (1834-1924), who relies on the hagiography of Saint Ciarán to explain why both he and Brunsecha leave Ireland for Cornwall where he becomes Saint Piran and she Saint Buriena:

S. Buriena was one of the Irish Colony that came over about 520. Leland in his Itinerary (iii, 18,) says, "S. Buriana, an Holy Woman of Ireland, sumtyme dwellid in this place and there made an oratory. King Ethelstane going hence, as it is said, unto Sylley and returning, made ex voto a College where the oratorio was." She has been identified by Mr. Adams with 'Bruinech the Slender' of the Martyrology of Donegal, "who" says the scholiast on the martyrology, "is venerated in a town bearing her name, in England, on the 29th May." But this is inaccurate, the feast of S. Buryan being the nearest Sunday to May 12.

Leland calls her Bruinet, and says she was a king's daughter, who came into Cornwall with S. Piran. The forms Bruinet and Bruinech are mere variations in spelling, that occur repeatedly as Gobnat and Gobnach, Rignat and Eignach, Dervet and Dervech. The ech, or at, or et, is a diminutive for female names, like the oc for male names. So Brig becomes Bridget.

Bruinech was of illustrious birth. She was the daughter of Crimthan a chieftain in Munster, grandson of that Oengus MacNadfraich who had been baptized by S. Patrick. She was a kinswoman of S. Kieran.

The story of Buriena is found in the life of S. Kieran (Piran), of Saighir. It has been paraphrased by Mr. Adams, from Colgan (Journal R. Inst, of Cornwall, vol. iv. p. 141). But it will be preferable to give it from the original text in the Salamanca Codex: — She was, as already stated, daughter of a chieftain in Munster, and she embraced the religious life under Liadhain the mother of S. Kieran, one of the first abbesses in Ireland. Liadhain had a religious house at Killyon in King's County. The damsel was slim in form, and so went by the name of Bruinech or Brunsech Caol, the "Slender;" she was also very beautiful.

Dimma, of the Hy Fiachai District in West Meath, fell in love with her and carried her off against her will, with the assistance of his clansmen.

The wrath of S. Kieran was kindled, and he sped after the ravisher, to demand her back again. Dimma refused to restore her to liberty, "Never!" — said he — " till I hear the cuckoo call at day-dawn and arouse me from sleep."

It was winter time, and a deep snow lay on the ground and crested the castle walls. As the gates were shut, Kieran and his companions had to spend the night in the snow outside. They passed it in prayer. Lo! next morning a cuckoo * was perched on every turret of the chieftain's castle, uttering its plaintive call. Surprised and alarmed at this marvel, Dimma released the maiden. [* Mr. Adams says "a Swan," the word is "Duculus," but according to another version the bird was a heron.]

Putting aside what is fabulous in this story, we see the venerable saint's enthusiasm for the protection of innocence, and there is something very pathetic in the thought of his spending the winter night in the snow, outside the gate, rather than abandon his efforts to save the poor girl.

What actually took place was that Piran or Kieran "fasted against" Dimma. This was a practice among the Irish. If a man wanted something very particular, and was refused it, he went to the door of the man of whom he made petition and remained there exposed to the inclemency of the weather, and refused all food, till he died. This was literally laying his death at the door of the other, and it entailed on the man who let him die all the consequences of a blood-feud. The practice is not unknown now in India.

When, in the 12th century, the life of S. Kieran was re-written, the editor could not understand the practice, which had long ago been abandoned, so he invented the story of the cuckoo to give point to the incident, and account for the surrender of Dimma.

As soon as Bruinech had been released, Kieran took her back to his mother at Killyon.

After a few days the chieftain repented of having released her, his passion for the girl was not overcome, and he returned to the convent to again carry her off. In her fright, Bruinech fainted away, and Dimma was shewn her, lying unconscious. He stormed at Kieran, who he thought had killed her rather than give her back to him, and he threatened to drive him out of the country.

Kieran replied, "Thou hast no power over me. Thy strength is but a vain shadow."

According to the legend, at this juncture news arrived that Dimma's dun was on fire; that is to say, the wooden and wickerwork structures within the fort were blazing. At the tidings, the chief hastily left the convent, in hopes of rescuing some of his valuables from the flames.

Dimma is by no means a fabulous personage, he was chief of the Cinel Fiachai; he was fourth or fifth in descent from Niall of the Nine Hostages, King of Ireland, who died 405, and was even uncle of a Saint, Aid Mac Bric, who died in 588.

It was clearly undesirable for Kieran to remain in the place, and it is possible that it was at this time he removed to Cornwall, taking the damsel Bruinech with him. She is said to have lived many years afterwards.

Kieran or Piran became Bishop about 538, and he is thought to have died about 550, but this is mere conjecture, as the Irish Annals do not give the date of his decease, and as this occurred out of Ireland we may put his migration to Cornwall at about 520. Buriena is identified with Bruinech by several martyrologists.

Nothing is recorded of the acts of S. Buriena in Cornwall, but the general tradition is that she spent the rest of her days in good works. It is rather remarkable that her settlement should have been near the foundation of S. Senan, rather than near any of those of S. Kieran. Her settlement must have been of considerable importance, for it had a Sanctuary, which implies this. The Sanctuary, with its oratory, remains about a mile south-east of the parish church that bears her name, beside a rivulet, on the farm of Bosliven. There are traces of extensive foundations near the oratory. Probably popular veneration attached to this place, long after the transfer of the church, for it excited the rage of Shrubsall, one of Cromwell's Officers, and he almost totally destroyed it.

The day of S. Bruinech, in the Irish Calendars is on May 29, and this indeed is the day marked as that of S. Buriena in some English Calendars. But at Burian the feast is now held on the Sunday nearest to May 12, and in the Exeter Calendar her day is given as May 1. The Feast at Burian is on Old-Style May-Day, i.e. eleven days after May 1.

In the second edition of the "Martyrologium Anglicanum" of Wilson, 1640, she is inserted on June 19, but in his first edition, on May 29.

Her death probably occurred about 550.

In art she would be represented as an Irish Nun, in white, with a cuckoo.

Rev. S. Baring-Gould, 'A Catalogue of Saints connected with Cornwall, and List of Churches and Chapels Dedicated to them', Journal of the Royal Institution of Cornwall, Volume XIII, (1895-98), 485-488.

Modern scholar, Nicholas Orme, has a number of observations to make on Saint Buryan in his authoritative 2000 study The Saints of Cornwall. He traces the first mention of her in the historical record to a tenth-century list of saints, where she appears as 'Berion' and 'in a charter attributed to King Athelstan (925-39) granting property to the clergy of the church of Sancta Beriana, meaning St Buryan (Cornwall)'. As for her supposed Irish origins, Orme concludes:

The context of Cornish history, however makes Buryan more likely to have been a Brittonic saint from Brittany or Cornwall.

Yet, although I don't accept Saint Burian as an Irish saint, it is nevertheless fascinating to see the process by which the cult of a saint from this country is transferred to another. Interestingly, on June 4 the Irish calendars mark the feast of the Cornish saint Petroc, so the traffic is not all one-way!