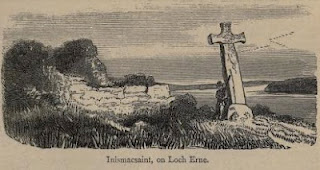 There is some confusion surrounding the exact feastday of Saint Ninnidh of Inismacsaint, a small island on Lough Erne, County Fermanagh. Canon O'Hanlon first mentions him on 16th January:

'On this day, the Martyrology of Tallagh registers the name of Ninnidh,Leth derc, as having been venerated. Marianus O'Gorman's Calendar enters his festival on the 16th of January. However, the festival and acts of this saint seem more appropriately referable to the 18th of this month, where they may be seen.'

On the 18th January, O'Hanlon summarizes the evidence for this date as the feastday:

'Although we do not find any allusion to St. Nennidh, in the Feilire of St. Oengus, at the 18th of January, yet, at this date, both in the published and in the unpublished copies of the Tallagh Martyrology, he is duly commemorated. However, Marianus O'Gorman and Cathal Maguire place the festival of St. Nennius or Nennidh of Inis-mhuighe-samh, at the 16th of October. Other writers of saints' lives also adopt this arrangement. In the Martyrology of Donegal, on this day, occurs the feast of Ninnidh, Bishop of Inis-Muighe Samh, in Loch Eirne. The calendarist adds, that he was Ninnidh Laebhruise, or Laobruise, who belonged to the race of Enda, son to Niall. Usually he was called Ninnidh Laimhiodhan, as O'Clery states. The book of hymns says, also, that Ninnidh, son of Eochaidh, was Ninnidh Laimhiodhan. His acts are given at some length, by Colgan, in his great collection of Irish saints but on the mistaken supposition, that the Bishop and Abbot of Inismacsaint, sometimes denominated Laobh-dearc, was the same as Ninnidh, the priest who acted as chaplain to the holy St. Brigid, first Abbess of Kildare, and who is sometimes called Ninnidh Lamhghlan, and sometimes Ninnidh Laoimhiodan.

Under the head of Inis-Muighe-Samh, Duald Mac Firbis enters Ninnidh, bishop, at January 18th. This holy man would seem to have been the son of Ethach, and he was distinguished likewise by the denomination of Laobh-dhearc. It is incorrect to state, that he flourished so early as the fifth century, when possibly he was not then born.'

Here is the entry in full from the Martyrology of Donegal for 18th January:

NINNIDH, Bishop, of Inis-Muighe-Samh, in Loch Eirne ; and he was Ninnidh Saebhruisc, who was of the race of Enda, son of Niall. It was he who was usually called Ninnidh Laimhiodhan, to my knowledge. See the Life of Brigid, chap. 41 . The Book of Hymns states that Ninnidh, son of Eochaidh, was Ninnidh Laimhiodhan.

Saint Ninnidh of Inismacsaint, however has a distinct identity as one of the disciples of St Finnian at the great monastic school of Clonard, and as one of the 12 Apostles of Ireland. His memory is still preserved in Fermanagh, and below is a short account of the saint's life from a local history publication:

St. Ninnidh, who was a grandson of the High King Laoire, was born in Donegal, and from an early age it was seen that he was interested in religious matters. He was therefore sent to Clonard to be educated under St. Finnian. His fellow students at this establishment were said to be St. Ciaran of Clonmacnoise St. Molaise of Devenish and St. Aidan of Ferns. St. Ninnidh was one of the twelve students supported on the milk of St. Ciaran's Dun Cow. St. Ninnidh, St. Aidan and St. Molaise were all close friends and St. Ciaran, their colleague, visited Inishmacsaint in 534.

St. Ninnidh preached along the south shore of Lough Erne making the island of Inishmacsaint (Island of the Plain of Sorrel) his headquarters around 532 A.D. He likely journeyed up and down the southern portion of Lower Lough Erne in a hollowed-out boat, coming ashore at intervals and making his way inland, in order to meet the people and spread the Gospel, no doubt having the odd heated discussion with the local druid. He probably established a little church or residence at Glenwinney (Ninnidh's Glen), visited Ninnidh's Hill above Roscor to meditate and pray and quenching his thirst at nearby Ninnidh's Well. A route led from Inishmacsaint Island to Maherahar and Inishway; thence to Glenwinney where there was a small church; through Urros and Beagh along what was later to become the old coach road from Dublin to Ballyshannon through Magho. The route then turned to Ninnidh's Hill above Roscor where a small church was established and then through Killybig to another little church at Kilcoo. This route was probably used by St. Ninnidh and the early Christians of the area during rough weather when it was dangerous to go by Lough Erne.

He is said to have fasted during Lent on Knockninny, which still bears his name, no doubt making his way there by boat from Inishmacsaint. The saint was bishop over an area stretching from the oustskirts of Derrygonnelly to Bundoran and the saint's feast day is celebrated on the 18th January, which is the date he died, but the exact year is unknown. St. Ninnidh's Bell, which was cast and presented to him by St. Senach of Derrybrusk, was still in existence on the island in the middle of the seventeenth century, probably until the dissolution of the monasteries of 1630. Later the Bell was in the Castle Caldwell Museum, and is now in the National Museum of Scotland in Edinburgh. Archdall, writing in the early 19th century stated "The Saint's Bell is yet preserved here as a precious relique and is holden in so great a veneration that it is often judicially tendered them to swear on". It is not known who succeeded St. Ninnidh on his death but the next parson mentioned is Fiannamail, descendant of Boghaine, who was slain in 718.

The reference to the bell of St Ninnidh being used as something on which the local people would swear an oath is a motif often seen in accounts of the relics of  Irish saints. It testifies to a living link between the local people and their saint and an expression of, literally, a 'hands-on' devotion.