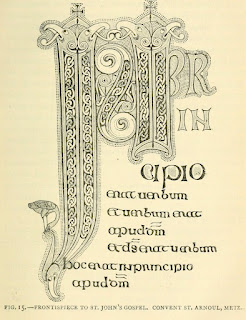 Canon O'Hanlon has an account of a most interesting 10th-century saint who laboured in continental Europe, Fingen of Metz. He shares his February 5 feast day with an earlier saint, Fingin, son of Odhran, of whom nothing else seems to be known, but it appears to O'Hanlon that the existence of the earlier Fingin's commemoration on this day was the reason why the 17th-century hagiologist, Colgan, assigned the 5th of February to his later namesake of Metz as well. Saint Fingen is commemorated in one of the Metz calendars at 5th October, which is most likely the true date of his natalis. At the end of the piece Canon O'Hanlon introduces yet another Finghin, this one an Abbot of Roscrea who reposed in 1005, and suggests that he may have been our saint of Metz but I am not convinced. Fingin of Metz had an illustrious career in Europe as a founder and reformer of monasteries, and seems to have enjoyed secular patronage at the highest levels. He has left an epistle to a nun, the Latin text of which has been published, but Orthodox readers will also be interested to read of the celebration of the Greek Liturgy in the 10th century by the Bishop of Toul in which Irishmen were also involved.

St Finghin, Son of Odhran Feabhla, or, of Metz, in France.
[Probably in the Tenth and Eleventh Centuries.]

In distant countries, as well as at home, the names of many renowned Irishmen are honoured for their merit and virtue. Colgan has some notices of a holy man, called Fingen, inserted in his great work, at the 5th of February. A saint bearing this name, is mentioned, also, by our native compilers of martyrologies. He is entered, in the Martyrology of Tallagh, at the 5th of February, under the title of Febla, Fingin mic Odhrain. There must be some transposition of proper names, in this record; unless, indeed, an entry in a later Calendar be incorrect. Thus, we read, Finghin, son of Odhrán Feabhla, is set down in the Martyrology of Donegal, as having a festival on this day. The account given of St. Fingen is very imperfect, as we find it in Colgan's work. The Bollandists have omitted this saint, placing him, however, among the Praetermissi et in alios dies relati, for the 5th of February.

They observe, likewise, that Colgan had not a sufficient reason for giving him the title of beatus, since he had found him called only virtuosus. The chief cause, why Colgan placed his St. Fingen, at the 5th of February, was, for the reason, that the name of a Fingen, the Virtuous, son of Odran Fedhla, happens to occur at this day, in some Irish Calendars. The holy person, thus commemorated, in our fasti, was a very celebrated Irish abbot, who is said to have left Ireland, and to have gone to the kingdom of Lothaire. He is called Fingen, and he must have been born, sometime in the tenth century. It is said he succeeded St. Cadroe, as abbot of St. Felix, otherwise known as St. Clement, at Metz, in or about the year 976. Mabillon, who treats concerning him in his history, did not scruple to consider this Fingen as a great saint, and he often speaks of the abbot, at Metz, as a most religious man. Yet, this Fingen, in all probability, was different from the saint, who is recorded, at the present date, in our native Calendars.
Nor did Colgan state, that they were the same, although both were, no doubt, Irishmen. At least, the Fingen, celebrated in connexion with Metz, is regarded as a Scottus, by race, and derived by birth from Hibernia. We are informed, there was a pretty full account of him, in an ancient Life of Thierri I., Bishop of Metz, which unfortunately has not been recovered, if the biography be extant. Besides other mistakes, concerning Fingen and his Irish monks, admitted by Fleury, he calls them Ecossois thus misleading his readers, as to their nationality. The old abbey of St. Symphorian had been rebuilt, by Adalbero II., Bishop of Metz, who had a great esteem for Fingen. Over it, this holy man was placed, in the year 991; and, with the assistance of the Empress Dowager Adelhaide, a protectress of Fingen, and of the Irish Benedictines, and grandmother to Otho III., as yet only king, Adalbero obtained from the sovereign a confirmation of the rights and possessions of this establishment. Conditions were imposed, that the Irishman Fingen, its first abbot, and his successors, should not have any other than Irish monks, so long as these could be found, but, in case they could not, the admittance of monks belonging to any other nation was allowed; and, that prayers should be constantly offered there for the king's soul, for those of his parents, for the existing bishop and for his successors.

This deed was signed by the king, at Frankfort, on the 25th of January, A.D. 992, in the ninth year of his reign, and in the 5th Indiction. There is a short epistle of Fingen, still extant, in the library of St. Remigius of Rheims, to Fastradis a nun, concerning a monk, named Guilier. This was found by Mabillon, who seems to have published the letter in its entirety. Fingen was sent to re-establish the monastery of St. Peter and St. Vitonus, now St. Vannes, at Verdun not long after he had been set over St. Symphorian.

At Verdun, he fixed some Irish monks. Seven of these were there, under his direction, when the celebrated Richard, dean of the diocese of Rheims, and Frederic, who had been Count of Verdun, applied to him in 1001, for permission to become members of this house. It is stated, that they first went to consult St. Odilo, at Clugni, for direction, and he advised them to become monks under the holy Abbot Fingen. The anonymous author of a Life of Richard pretends, that on his and Frederic's first going to Fingen's monastery of St. Vannes, they did not find there a very regular observance of religious rule. However, this story, about the defect of regular observance, is rejected altogether by Mabillon, who shows, that Fingen was a very holy man, and that he could not be deficient in enforcing regularity, in the monastery over which he presided. It seems probable, Richard's and Frederick's reason for having consulted Odilo was, that on their first going to Verdun, they found another monastery there, lately founded by Bishop Wigfrid, which seemed to them more convenient, although the monastic observance was not as regular, as in Fingen's, at St. Vannes. This latter was small and deficient in buildings. As they were persons of high rank in the world, Fingen at first was loth to receive them. He was afraid, that they could not put up with the poverty and strict discipline of the monastery. At length, however, he complied with their request.

The saying of Fleury, that Odilon sent Richard and Frederick back to St. Vannes, under the persuasion, that they would reform the establishment, is quite a mistake; for, they could not be expected to do so, while they remained only simple monks. The Irish abbot instructed and trained his disciples so well, that they became two of the greatest and most useful men of their times. Richard especially was very much distinguished. St. Fingen, three years after he had received Richard, died in the year 1004, and was succeeded by his holy disciple.

It is singular, that in the Irish annals, the death of a Finghin, or Finguine, called Abbot of Roscrea, is marked, at A.D. 1005. This date comes so near that of the death of our St. Fingen, that it might fairly be suspected they were one and the same person. The day of St. Fingen's death was probably the 8th of October, at which he is praised in the Necrologium of St. Clement of Metz, as abbot, having been buried in its church. To finish this account of Irish ecclesiastics, who were distinguished in foreign countries, during the tenth century, which is supposed to have been a dark age, we shall add a curious circumstance related, regarding St. Gerard, Bishop of Toul. This prelate, in 986, gave a retreat, in his diocese, to several Greeks, who, mixed with Irishmen, performed the Church Service, in their own language. They all officiated, according to the Greek rite. Hence, we see, that the Irish ecclesiastics still continued to cultivate Greek literature, and, at a time, likewise, when learning had not been in the most flourishing state on the Continent.