The Daughters of Cainnech, September 24

When I first saw the notice for The Daughters of Cainnech in the list of contents of saints commemorated on September 24 in Volume 9 of the Lives of the Irish Saints, I assumed that Canon O'Hanlon would be unable to bring us any details apart from the notices from the calendars. In this case, however, a County Waterford priest had written to the author with details of the lineage and locality of these holy women, whom he linked to Saint Declan. Cainnech's daughters are only one of a number of similar filial groupings recorded on the Irish calendars, the most famous of which is probably the Daughters of Leinin, whose name lives on in the County Dublin placename now Anglicized as Killiney. In some of these cases, like Leinin's daughters or the Daughters of Comgall who are commemorated on January 22, tradition records the names of the individuals who make up the group. That doesn't seem to be the case here, but the locality where the daughters of Cainnech flourished is firmly identified with Molough, near Clonmel, County Tipperary. In the 14th century the Butler family founded a nunnery dedicated to Saint Brigid of Kildare on the site, and I have reproduced the details and sketch of the ruins.

The Daughters of Cainnech, or Maghlocha, County of Tipperary. [Sixth Century.]

According to the manuscript and published Martyrology of Tallagh, the Daughters of Cainnech had veneration paid them, at the 24th of September. The Martyrology of Marianus O'Gorman commemorates the festival of Cainnech's chaste daughters, at this same day. The glossographer adds, that they belonged to Maigh Locha. Their parentage and locality have been fully identified. These holy women were the children of a chieftain who lived in the time of St. Declan, patron of Ardmore, and whose castle had been saved from fire by the latter. Their place was formerly called Magh Locha, now Molough, near the great bend of the River Suir, and not many miles from Clonmel, in the County of Tipperary. There they seem to have lived in religious retirement, most probably some time in the sixth century. Of their lives, however, we find no record.

Long after that time, their place is said to have been the site for a nunnery, dedicated to St. Brigid, in the former diocese of Lismore. It is mentioned by Archdall, as being in the County of Tipperary; but, he is wrong in placing it near Carrick-on-Suir. The ruins of the old nunnery of Moylough are situated on level ground, about one furlong north of the River Suir. In the year 1840, two parts of this building remained, viz., a chapel and a lateral house; but, from the fragments of walls about them, it appeared to have been a habitation of considerable extent. The church or chapel remaining was then in a tolerable state of preservation, extending from east to west, and measuring in length on the inside 60 feet, in breadth it was 27 feet, 6 inches. Two windows were in the east gable, constructed of chiselled and brownish sand-stone. There were three windows on the southwall, but these were much disfigured and built up with rough masonry. The door-way was on the south wall, and at a distance of fourteen feet from the west gable; it was constructed of chiselled and ornamental lime-stone on the outside, and of chiselled sand-stone on the inside. The west gable had been surmounted by a belfry, having two semi-circular arches, constructed of brownish and chiselled sand-stone. The lateral house extended to the northwest of the chapel, and touching it at the north-west corner. It was fifty-five feet in length on the outside, and twenty-seven in breadth. Its walls were three feet six inches in thickness, and about fourteen feet in height. 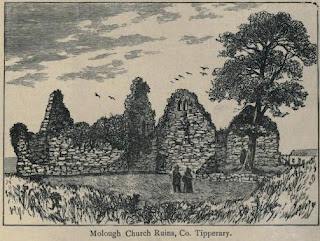 In the Martyrology of Donegal, their festival is also inserted, at the 24th of September.