Prayer of Saint Molaisse to the Holy Spirit 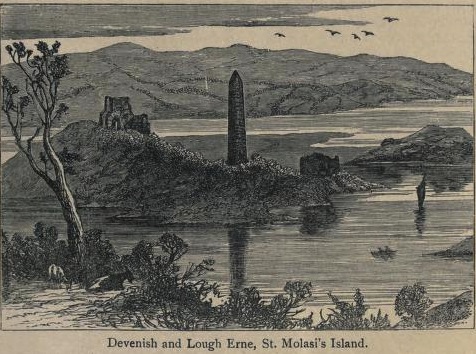 September 12 is the feast of Saint Molaisse of Devenish, a saint from the beautiful lakeland county of Fermanagh. A prayer attributed to Saint Molaisse was published as part of an occasional series 'Fragments from the Early Irish Church' in the Irish Ecclesiastical Record, which I reprint below:

St. Molaissi of Devenish flourished in the sixth century and his death is registered in the Chronicon Scotorum, in 564: " Molaise of Daimhinis quievit" [1] in the Annals of Ulster and of the Four Masters the entry is made under the year 563. He founded a famous church and monastery in the island of Daimhinis, i.e., " Bovium insula", now Devenish in Loch Erne, not far from the present town of Enniskillen. A beautiful round tower and the ruins of the old monastery still adorn the island (Petrie's Round Towers, pp. 355, 395).

In the Felire of St. Oengus the Culdee, the name of St. Molaissi is commemorated with other saints on the 12th of September as follows:

A gloss also is added to the original text, and from it we learn that St. Molaissi was only in his thirtieth year when he attained his crown, and that he himself described his monastery in the following verse :

" A happy land we have found,
A broad lake in Sliabh Achad,
A common resort for the Gaels,
The beloved abode of God the Father".

In the curious and very ancient Irish tale entitled " The Courtship of Bec Fola", there is a passage relative to our saint which illustrates the customs of our island in those early times. Four chieftains had challenged their rivals to meet them in deadly strife in the island of Daimhinis. On the appointed day they proceeded thither in their richest attire. Seven of the combatants were soon numbered among the dead, and the only surviving one was severely wounded. The bodies of the slain were interred by St. Molaissi, and he sent four of his religious to the monarch Diarmaid, to know what was his pleasure regarding their weapons and rich ornaments. It was on a Sunday that these messengers reached the monarch's abode, and it being unlawful for the clergy to travel about on the Lord's day, it is added that Diarmaid " drew his cloak over his head that he might not see the strangers". The religious, however, told him that it was "by order of their superior and not for their own pleasure" that they had undertaken this journey: and having detailed the circumstances of the combat, they thus continued :

St Cuimin of Connor flourished about a hundred years later and in his poem on the Characteristic virtues of the Irish Saints, he thus speaks of Saint Molaissi:

" Molaissi, of the lake, loved
To live in a cell of hard stone :
A strangers' home for the men of Erin,
Without refusal, without a sign of inhospitality" .

Many other particulars connected with St. Molassai may be found in Lanigan, vol. ii. pag. 218. We now present to our readers the sweet prayer which he composed.

The Holy Spirit, to abide in
Our bodies and our souls,
To protect us unto Jerusalem
From dangers, from diseases,

From demons, from sins,
From hell with all its evils:
O Jesus, may thy Spirit
Sanctify us, save us".

[3] O'Donovan in his Ir. Gr., pag. 438, explains ministir as indicating " a portable relic". It seems to me to be derived from the Latin word Ministerium, which often occurs in medieval writings, and which is explained by Du Cange as "mensulam juxtaaltare, in qua reponuntnr vasa ad sacrificium idonea". Our venerable Irish Abbot Dungal, in 814, when sending some silver to a brother abbot in France, thus explains the purposes for which he wished it to be employed: "Volo rogare, si vobis facile est ut iubeatis uni bono et perito de vestris fabricare illud et facere inde ministerium, calicem et patenam" (Jaffa's Monumenta Carolina. Berlin, 1867, pag. 436). It would thus be something like a portable safe for containing the sacred vessels, and perhaps the Gospels or Lectionary for the service of the altar.