'The Exaltation of Dear Christ's Cross' 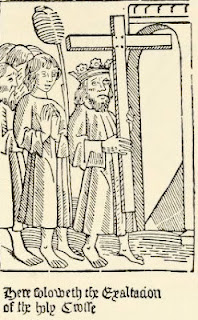 September 14 is the feast of the Exaltation of the Holy Cross, which the 12th-century calendarist, Marianus O'Gorman, describes as 'the Exaltation of dear Christ's Cross, the great, pure, diademed standard'. Father John Ryan, in his classic work on Irish monasticism, has written of the use of the sign of the cross by the Irish monastic saints:

To invoke the divine aid against these evil powers the sign of the cross was in constant use. St. Columban, during his meditations in the woods near Luxeuil put that holy sign on his forehead frequently as a form of armour. His monks did the same whenever they left the monastery. Columban's successor at Luxeuil, the abbot Athala, had a cross erected outside his cell, so that when going out or returning he could lay his hand upon it before putting the sign of salvation upon his brow. A torch when lighted by a junior monk had to be handed to a senior to be thus blessed, and spoons when used at table had to be treated similarly by the brethern. In Iona the same custom prevailed; for it is recorded that St Columcille was displeased when the holy sign was not placed on a milk vessel (Adamnan ii, 16). The 'signum salutare' might be placed on tools and used for various pious purposes. When his uncle Ernan died suddenly on the way from the harbour to the monastery, a cross was raised on the spot where life failed him and another on the spot where Columcille stood awaiting his approach. Another cross, fixed securely in a large millstone, was erected in the place where the old white horse wept for the saint's approaching end just before his death. Caesarius of Arles shows that the practice of signing oneself with the sign of the cross was very common in Gaul. St. Patrick made the sign of the cross upon himself a hundred times during the day and night, and never passed a cross upon the wayside without alighting from his chariot and spending a while beside it in prayer. St. Jerome said it could not be made too frequently. The hermits in the Egyptian desert were wont to make the holy sign over their food and drink, before they took their repast, and one of them is credited with the statement that "where the cross passes the evil in anything is powerless."