September 27 is the commemoration of one of the many Irish saints who bear the name of Fintan (Fionntain). In his account of the saint below, Canon O'Hanlon makes the case for Saint Fintan of Howth and engages in an illustrated discourse on the remaining ruins at this County Dublin site, only to finish up by saying that he doesn't have any evidence that this is the Saint Fintan commemorated today! I find this a charming, if occasionally irritating, feature of Canon O'Hanlon's work and even if we cannot conclude that the Fintan named on the Irish calendars at September 27 is Saint Fintan of Howth, I welcome the opportunity to learn of him.

Nothing particular appears to be known regarding this St. Fionntain, whose name occurs, in the Irish Calendars at this date. The entry of Fintan's feast at the present day is noticed, in a line of Marianus O'Gorman's Irish metrical Festilogy. [It is translated as follows by Dr. Whitley Stokes:" Fintan himself against plunderings."] Among the many holy men having the same name, and without any other designation, it seems difficult to know when and where he lived. On the peninsula of Howth, in the vicinity of Dublin, and at a considerable elevation on the Hill, may be seen the small church or oratory of a St. Fintan. It is supposed to have been formed out of the "survivals" of at least two churches—it may be of more—one of which was of much greater dimensions than the present church, and the other was about the same size as the structure now extant. The present "St. Fintan's" appears to stand partly on the site of that early oratory. An examination of the foundations shows, that they are laid at two levels. Evidence for such conclusions are seemingly afforded, by the peculiar stone dressings of the apertures, such as found in the door, small windows, and interior recesses. There is a gable over the western door, now covered with ivy, but having an ope for a bell in its upper part; while between it and the door-way, there is a recessed circular window. The whole of the interior had been plastered with mortar, and the exterior was dashed; but, both the mortar and the dashing have fallen off, leaving only an indication that the walls had been thus treated. At the western end are traces showing, that the ends of beams resting on the side walls supported a loft, while light was afforded only from the circular window already mentioned. 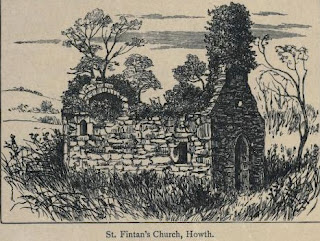 A short distance from the church is the holy well of St. Fintan, but any tradition of the day when pilgrims resorted to it has not been preserved in the locality to give a possible clue, which might serve for the patron's identification. An ancient cemetery surrounds the oratory, and there are still to be seen several tombs and graves. The scenery around St. Fintan's Oratory has been described and admirably versified in a local legend, which introduces Aideen as the heroine, and records her rest under a remarkable Cromlech, in the adjoining beautiful demesne of Lord Howth. From the simple entry of his name, at this date, we do not feel warranted in connecting the present Fintan with this locality; neither is it established, on any fair grounds, that any other so called had been venerated at Howth. We find Fionntain merely set down in the Martyrology of Donegal, at the 27th of September, and the same notice is in the Irish Calendar, belonging to the Ordnance Survey Records.