The Feast of Saint Michael the Archangel in Ireland 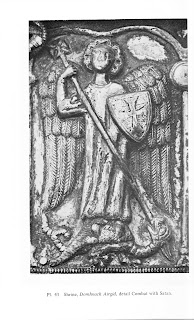 As September 29 is the feast of Saint Michael the Archangel I republish a 2009 post from my former blog which provides a sketch of the history of the feast in Ireland:

Canon O'Hanlon has a brief account of the feast of Saint Michael the Archangel in Ireland based on the surviving calendar entries for September 29:


In the Church from a very remote date, the Festival of this Head of the Angelic Host had been observed with special solemnity. In Ireland, St. Oengus the Culdee has pronounced a distinguished eulogy on him, at the 29th of September, in the "Feilire", thus translated by Dr. Whitley Stokes in the Leabhar Breacc copy:

" At the fight against the multitudinous
Dragon of our Michael stout, victorious, the
soldier whitesided, hostful, will slay
Wrathful Antichrist."

Allusion is made to his fight with the Dragon and Anti-Christ. The Scholiast has comments which state, that Michael was Prince of the Angels, and that as a soldier he was the champion whose name is explained by 'sicut Deus' in Mount Garganus. In recording his feast at this day, Marianus O'Gorman addresses the Archangel Michael as a powerful intercessor:

"May the great Archangel Michael be a buckler to me against devils to protect my soul!"

I was intrigued by these references to Saint Michael and the battle with the Antichrist and went on to do some further reading on the subject. One of the papers I read posed the question:


The tenth and eleventh centuries witnessed an extraordinary increase of interest in the archangel in western Europe. What explains the rapid growth of this cult during the period, especially in the years between 950 and 1050?

The author gives this answer:


1. The militancy of St Michael as a symbol for this turbulent epoch. This development of sacred militancy is unquestionably one of the principal reasons for the popularity of the saint.

2. Another is the increasing prominence given to St Michael as a personal protector of every Christian soul, the angelic cura animarum. Some of this interest stems from the western discovery of the writings of Pseudo-Dionysius in the 9th century, with his attention to the hierarchy of spirits and the function of the archangels as messengers. Yet some of it also arises from the Celtic tradition in which during the Middle Ages St Michael was seen as a soulmate, one responsible for conducting each person after death to Judgment. Out of this tradition would come the image of Michael with his scales weighing the souls at Judgment, an image that would later become so prominent on the western facade of Gothic cathedrals.

3. A third aspect of the increasing importance of the archangel in this period is his apocalyptic role. How do we account for the growing interest in the apocalyptic Michael?...

He then looked specifically at the cult of the Archangel in Ireland:


As in so many other aspects of the Christian life of the early Middle Ages, Ireland seems also to have been a harbinger in its early interest in the cult of the apocalyptic Michael. A good example is found in the occurence of the feast of St Michael in 767. A terrifying thunder storm created a wave of panic in which the Irish, convinced the Last Judgment was about to occur, begged the archangel to intercede for them:

'The fair of the clapping of hands [so called] because terrific and horrible signs appeared at the time, which were like unto the signs of the day of judgment, namely great thunder and lightning, so that it was insufferable to all to hear the one and see the other. Fear and horror seized the men of Ireland, so that their religious seniors ordered them to make two fasts, together with fervent prayer and one meal between them, to protect and save them from a pestilence, precisely at Michaelmas. Hence came the Lamhchomart, which was called the fire from heaven' (Annals of the Kingdom of Ireland by the Four Masters from the Earliest Period to the year 1616, ed. J O'Donovan, Vol I (Dublin 1851), pp 370-73.) The Annals of Ulster list the event under 771.

The presence of Michael in Ireland seems more manifest in a number of ways in the 10th and early 11th centuries. The archangel was depicted with his scales on a high cross at Monasterboice. He also appears in the concluding portion of the great Irish epic of salvation history, the Saltaird, c.988. In this work of over 8,000 lines, which seems to have served as one of the foundations for the later medieval interest in the Fifteen Signs Before Doomsday, Michael will summon all to the Last Judgment:

'The archangel will call a clear call over the clay of every man, upon Adam's strong seed: all the many will arise". (Lines 8229-32 of the Saltair na Rann).

The growing importance of this archangel for the Irish is additionally confirmed by the fact that sometime in the period between 950 and 1044, the most famous site dedicated to him in Ireland had his name attached to it. The jagged peak jutting 700 feet almost straight up out of the Atlantic twenty miles off the south-west Irish coast became, not simply Skellig, but Skellig Michael.