The Feast of the Nativity of Our Lady 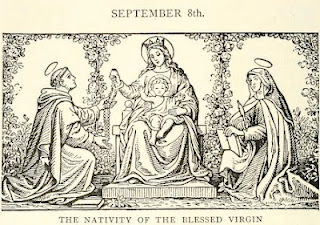 September 8 is the feast of The Nativity of Our Lady. Like all of the major Marian feasts, this commemoration was introduced to the West from the Eastern church. The feast appears in the earliest Irish calendars with the Martyrology of Tallaght simply recording:

Natiuitas Mariae matris Iesu, the birthday of Mary the mother of Jesus.

The slightly later Martyrology of Oengus makes it clear that this is a feast rather than a fast day:

8. Thou shalt commemorate Mary:
thou art not deadened on a scanty meal:
with Timothy after (the world's) ways,
and three hundreds of martyrs.

The accompanying scholiast notes spell it out:

The late 12th-century Martyrology of Gorman begins it's entries for September 8 with this notice:

Canon O'Hanlon, in Volume 9 of his Lives of the Irish Saints, has this short entry on the feast, noting that in some parts of the country popular devotion at holy wells was evident on this day:

Feast of the Nativity of the Blessed Virgin Mary.

In the ancient Irish Church, the Festival of the Birth of our Divine Lord's Mother was celebrated on the eighth day of September, as we learn from the Feilire of Aengus. On this there is a short comment. About the year 695, this feast was appointed by Pope Servius. In various parts of Ireland, this festival was celebrated formerly with very special devotion, as parishes, churches and chapels had been dedicated to the Blessed Virgin Mary, and this was a favoured festival day. The patrons or patterns that until of late were yearly celebrated very conclusively attest it. In Kilnenor parish, County of Wexford, there is a holy well, at which a patron was formerly held on the 8th of September. According to a pious tradition, a concert of angels is said to have been heard in the air to solemnize the Nativity or Birthday of the Blessed Virgin Mary.

Email ThisBlogThis!Share to TwitterShare to FacebookShare to Pinterest
Labels: Feasts, The Mother of God