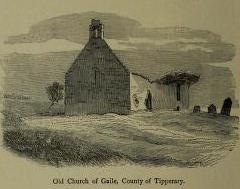 Canon O'Hanlon, in Volume VI of his Lives of the Irish Saints, has an entry at June 24 for a Saint Gaibhrein. The seventeenth-century Donegal hagiologist, Friar Michael O'Clery, identified him with a  fellow-student of Saint Mochua of Balla, interestingly this Gabhrin was described as a 'Bishop of the Britons'. Whatever the accuracy of this identification Saint Gabrin's feast day was recorded on the Irish calendars at June 24. In his account below Canon O'Hanlon also speculates on a County Tipperary location for the city of 'Gael' mentioned as the site of Gabhrin's church in the Life of Saint Mochua:

We find the name, Gabrin, set down in the Martyrology of Tallagh, at the 24th of June. According to the O'Clerys, the Life of Mochua of Balla states, that when Mochua left Bennchar, he proceeded to Gael, i.e., a city, which is in Fir Rois. A Bishop of the Britons was there named Gabhrin, and it is said, that he offered the church to Mochua, for they had been fellow-students together. The Calendarist O'Clery thinks this is the same Gaibhren, as that one to whom allusion has thus been made. Under the head of Gael, Duald Mac Firbis enters, Gaibhrinn, bishop, at June 24th. Where his See was situated, however, has not been discovered, nor when he flourished. There is a Geal or Gaile, a parish in the barony of Middlethird, and county of Tipperary. It lies south of Holycross, and east of the River Suir. Here are some ruins of an ancient church. A sketch of it is preserved among the drawings to illustrate County of Tipperary Records, for the Irish Ordnance Survey. The ruined church is surrounded by a cemetery. The west gable was surmounted with a belfry, while some of the walls and windows are still tolerably preserved; however, the east gable, down to the height of the side walls, was destroyed, in 1840. The church was 50 feet in length, by 10 feet, 10 inches, in breadth; the walls were over 3 feet in thickness, and about 13 feet in height. The doorway was on the south wall, about 13 feet, 10 inches, from the west gable; it was destroyed at top, on the inside, so that the original height is not now known; but, its width was 4 feet, 1 inch, and on the outside it had a semi- circular top, measuring 6 feet, 9 inches in height, and 3 feet, 6 inches, in width. This was finished off with chiselled limestone. The west gable contained a small window, which was quadrangular, on the inside, and round-headed, on the outside. There was a second doorway in the north wall, opposite that in the south wall. The parish of Geal was a rectory, and part of the benefice of Holy Cross, in the diocese of Cashel. According to John O'Donovan, the meaning of its denomination is not certain. In the Martyrology of Donegal, at the 24th of June, this saint is described, under the name of Gaibhrein.