The Pre-Patrician Saints of Munster 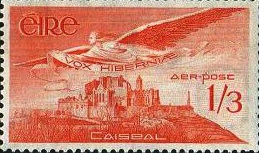 Tomorrow, July 24, is the feast of Saint Declan of Ardmore. He features, along with three other holy men, as one of a quartet of so-called 'pre-Patrician saints', said to have introduced Christianity to the province of Munster before the coming of Saint Patrick.  Some time ago I read a paper by Dagmar Ó Riain-Raedel on 'The Question of the Pre-Patrician Saints of Munster' in which she weighs up the evidence. Current scholarship is, of course, no longer defending the notion, so beloved of Canon O'Hanlon's generation, that Saint Patrick evangelised the entire island of Ireland. We can begin with the author's introduction to the four candidates and their claims:


As is well known, four saints, the quatuor sanctissimi episcopi as they are called since Ussher first drew attention to them in the 17th century, Saint Ailbe of Emly, Saint Declan of Ardmore, Saint Ciaran of Cape Clear and Saighir and Saint Ibar of Beggery Island, are supposed to have brought Christianity to Munster. As no Life of Ibar exists, his dossier has to be reconstructed from that of his supposed nephew, Abban of Kilabban and Moyarney. The other three saints, however, have very full records which, leaving aside the usual miracle stories, agree in maintaining that their subjects converted many people before Patrick ever came to Ireland.

O Riain-Raedel believes that fellow researcher Richard Sharpe has identified the central episode in this tradition - the conversion at Cashel of King Oengus Mac Nadfroich by Saint Patrick. I can never hear this story without recalling fond memories of an archaeological field trip in which a visit to the Rock of Cashel formed the climax. The site made a deep impression on me, as did the wonderful story that Saint Patrick, in converting the pagan king, inadvertently put his staff through the royal candidate's foot. The king stood there stoically with blood pouring from his wound, thinking it was all part of the reception ceremony and doubtless also thinking that this Christianity was a religion for real men!

This episode is recorded in Tirechan's Life of Patrick, but O Riain-Raedel sees it as significant that it:


received further elaboration in the Lives of the Saints in question. The Life of Ailbe, for instance, attaches to the episode the claim that Patrick specifically gave Munster to Ailbe, while the Life of Declan similarly names Ailbe as secundus Patricius et patronus Mumenie. Both of these texts also assert that Ailbe was to be the archbishop of Munster, with his seat at Cashel.

She then goes on to place the Cashel link in the context, not of the 5th-century introduction of Christianity to Ireland, but of the ecclesiastical politics of the 12th century:


As Sharpe has pointed out, Cashel was the focal point of most episodes involving pre-Patrician saints. However, Cashel became connected closely with Church affairs only after it was chosen as the site of an archiepiscopal see in 1111. Having no founder saint as such, it understandably came within the neighbouring monastery of Emly, Ailbe.

and she further believes that the composition of the Lives of the pre-Patrician saints, which Sharpe has shown are all interlinked,


must be set in a context involving the need for Munster churches to assert themselves against the predominance of Armagh.

The Munster writers do this, not by seeking to outrightly deny the claims of Saint Patrick to the conversion of Ireland, but by compromising those claims in Munster by the introduction of pre-Patrician saints. And, for O Riain-Raedel, this reflects the contemporary realities of 12th-century church politics:


The archiepiscopal see of Munster would seem to have been intent on consolidating its position as the second most important ecclesiastical institution on the island. The introduction in 1152, at the Synod of Kells, of the two additional archiepiscopal sees of Dublin and Tuam may have given rise to the need for such consolidation.


We have little information on the background to the formation of the various diocesan territories during the 12th century. However, it may not be a coincidence that nearly all of the churches connected with the so-called pre-Patrician saints were threatened by the interests of other churches at this time. Emly, for instance, had to contend with the encroachment of the O'Brien-sponsored diocese of Killaloe, just as Roscarberry had to fend off a threat from Cork. Similarly, Ardmore's claim to supremacy over the Deisi flourished for only a short time during the latter half of the 12th-century before losing out to the churches of Lismore/Waterford.


The establishment and revisions of the Irish diocesan structures by the reforming synods of the 12th century in effect created the conditions that gave rise to the need for pre-Patrician saints... The saints were certainly a godsend when it came to arguing the case for one or other diocesan interest.

What I found most fascinating in her analysis though, was the vehicle by which this need was fulfilled. For it seems that the Irish monasteries in Germany, the so-called Schottenklöster, were instrumental in making the pre-Patrician saints' claims. Indeed, the author says:


It would thus seem to be the case that the claim for pre-Patrician saints in Munster was first propagated in writing on the Continent in the Schottenklöster of Germany, in answer to conditions in Ireland.

and given the challenges to the Munster churches in the late 12th century:


very fortunately for Cashel, the industrious scriptorium at Regensburg in Germany was prepared to expend much ink on promoting and defending the interests of Munster.

As an example, we can look at the Life of Saint Albert, who turns out to be Saint Ailbe in Germanic dress:


About 1150 a monk there [Regensburg] composed the Life of Saint Albert, Archbishop of Cashel, who with his friend Archbishop Erhafd of Armagh, undertook a pilgrimage and ended up in Regensburg, where both found their last resting place. In the Germanic form of his name 'Albert', Ailbe is here firmly connected with the metropolitan see of Cashel.

I found the paper an interesting read, relocating the pre-Patrician saints from the misty days of the early 5th century to the very different days of the late 12th, ironically at the very time when the 'Celtic church' that had produced these saints was itself passing away. It was equally challenging to see the possibility that their stories were not so much home-grown tales passed down through the generations, but creations of Irish monastics in Germany, tailored to meet a specific need. Although it might sometimes seem that modern scholars are spoilsports who want to ruin a good story and deprive us of the comfort of some of our most cherished myths, their research can open up a deeper and richer appreciation of the hagiographer's art. Yet O Riain-Raedel does not totally dismiss the idea that there may be a genuine claim on the part of Munster to have a pre-Patrician Christian tradition:


Whatever accommodation had to be made, whether Palladius had to cede ground to Patrick or Patrick had to contend with the priority claimed for some Munster saints, the argument almost always turned on the position of the patron of Armagh. And that he still has to contend with the notion of a pre-Patrician evangelization of Munster stems from the inherent plausibility of the claim that it was here that Christianity first took hold in Ireland.

Fantastic site, some beautiful information on it. Brings tears to my eyes when I see how much in this modern Ireland we have lost. God bless and keep up the good work.

Thanks very much for your support. I agree that a lot has indeed been lost. Appreciate your comments.